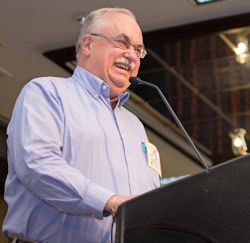 Ben Sherman. © Photo courtesy of Dale Willman.
There are thousands of professional journalists around the world who support the work and mission of the Society of Environmental Journalists.
But SEJ receives heartfelt support from more than journalists.
This year [2016], SEJ honors the first recipient of a new award we call “The Clem,” to thank a non-member of SEJ for his or her time and dedication in support of the SEJ mission of more and better environment journalism. “The Clem” is affectionately named in honor of Clem Henriksen, husband of SEJ member Carolyn Whetzel, who passed away in 2015 after years of helping SEJ in so many ways.
Our inaugural honoree is someone who has attended almost every SEJ conference in our 25-year history. In jest, we call him a flack. But in reality, we call him a friend. An ardent friend, in fact.
Ben Sherman of NOAA helps steer journalists to the right person or the right information whenever we come calling on him. He does his job in a manner that should serve as a model for other Public Information Officers everywhere. For more than 13 years, he has served as the Director of NOAA Communications and External Affairs at The National Ocean Service in Silver Springs, Maryland. Before that, he was the Media Relations Director for the National Sea Grant College Program for many years.
Beyond titles, Ben’s dedication to SEJ has shown itself in many ways not the least of which was what happened shortly after his heart surgery three years ago. Ben was determined not to miss his role on a tour of wetlands at our New Orleans conference. There, in the unbearable heat and humidity, just weeks after his surgery, was Ben. Conference chair Mark Schleifstein noticed Ben was wearing more clothes than most in the weather conditions and asked “why are you wearing a vest, Ben?” Ben smiled cooly and explained his vest was a chiller to keep his torso and heart cooled in the Bayou heat.
Ben, on behalf of scores of professional journalists everywhere, thank you for your sincere and genuine work on behalf of the SEJ mission.

"The Clem" was established in 2015 as “a perpetual award honoring a person who is not a member of the Society of Environmental Journalists yet who has volunteered to help our organization in a way and an extent that merits this special recognition.”

Clem was a leader in bringing Geographic Information Systems (GIS) experts to SEJ's annual conference. He made countless contributions to the organization as a volunteer trainer, tour leader, photographer and donor. Read more about Clem, and the award in his name, here.