Being Bold — It's Always a Good Idea! 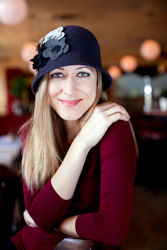 February 20, 2019 — After years of feeling isolated from national journalism here in Phoenix, and hearing crickets in response to pitches that took me days to craft, I decided I needed more in-person contact with editors. So I declared 2018 "The Year of the Conference." I attended five. Flint was my first SEJ conference, and I found it incredibly welcoming and friendly. I was very impressed with the editors, journalists and presenters, and made several connections. The sessions on international travel grants were especially eye-opening, and the speakers gave us fantastic inside information.

At another conference, I had successfully participated in a pitch slam that was like speed-dating individual editors. But for the SEJ conference I thought, 'We have to pitch in front of an entire room and a whole panel of editors? This has to be the most amazing story idea ever!' Since I couldn't come up with the world's best idea, I intended to sit on the sidelines. But when I saw only two people had signed up to pitch, I suddenly found that my legs were walking up to the panel of editors. I asked them if I could totally wing a pitch, and they told me to go for it. Surprisingly, they liked it! I followed up with the editor from Scientific American, and the story was published. It's always a good idea to be bold. Thanks for the opportunity, SEJ!