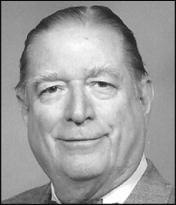 As we head into Memorial Day Weekend I am saddened to be sharing news just received from Mike Phillips, executive director of the Scripps Howard Foundation: David Stolberg, the founder of SEJ, died this week (May 24, 2011). He was 84.

Members will recall that "The Stolberg Award" is SEJ's highest organizational recognition for meritorious volunteer service. David was always so pleased to learn about the winners. We'll be honoring him in various ways this year, and very proud to give out The Stolberg as long as member-volunteers continue to power this group the way that they (you) surely do.

"I always believed in the value of networking, of the subliminal training that comes from an association with one's peers," David Stolberg said in recalling his role in founding SEJ. He spoke about it with John Palen of Central Michigan University as part of John's research for the academic paper:  "OBJECTIVITY AS INDEPENDENCE: CREATING THE SOCIETY OF ENVIRONMENTAL JOURNALISTS, 1989-1997." Here's an excerpt:

That belief, plus involvement with conservation and environmental journalism during a 38-year career with Scripps Howard, led Stolberg to the idea of a society for environmental journalists. "It was my concept," he said, and charter members agree. 'I'm extraordinarily proud of it.' Stolberg, assistant general editorial manager of Scripps Howard, floated the idea to the 1987 winners of the Edward J. Meeman Awards for environmental reporting, which he administered. "I asked if there was any interest — and there was none," he recalled with a laugh. "The idea could have died aborning." The next year's Meeman winners were enthusiastic, however, and Stolberg wrote to sound out other prize-winners. The response was positive. Eighteen people met as a planning group on Dec. 6, 1989, in the Washington, D.C., offices of the Environmental Health Center of the National Safety Council.

Thank you David. We'll miss you. The SEJ community would not be here today without the power of your vision, generosity and contagious energy. I'll be expressing our appreciation and sympathy to his family.

The Society of Environmental Journalists has lost a father. David Stolberg, longtime Scripps Howard executive, died on May 24 in Southington, CT. He was 84. "I always believed in the value of networking, of the subliminal training that comes from an association with one's peers," Stolberg recalled for John Palen, of Central Michigan University, who wrote of SEJ’s founding.

Stolberg, as assistant general editorial manager of Scripps Howard, had first floated the idea of forming a society to winners of the 1987 Edward J. Meeman Awards, Scripps Howard’s annual prize for environmental coverage.

But none of them ran with the idea. Finally, in 1989, the Meeman winners acted on Stolberg’s urging. In December 1989, 18 journalists met for the first time in Washington, D.C., to begin the process of forming SEJ.

Stolberg then helped the group secure funding to initiate the organization. "It was my concept," Stolberg told Palen. "I'm extraordinarily proud of it." To honor Stolberg, SEJ annually awards its prize for volunteer service in his name. Beth Parke, SEJ executive director, said other plans are in the works this year to honor Stolberg.