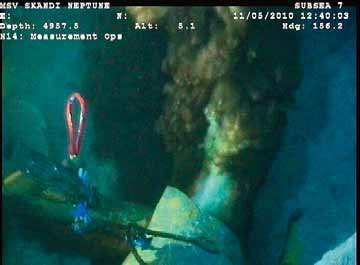 The original oil plume rushing out of the destroyed well head on the sea floor. Photo: BP America/PLC.

Coverage of the BP oil spill in the Gulf of Mexico, both breaking news and in-depth analysis of its cause, was a major focus of award-winning journalism honored by the Society of Environmental Journalists. But winning entries in the 2010-2011 Awards for Reporting on the Environment, the world’s largest and most comprehensive environmental journalism contest, delved into a wide range of environmental issues — from Chinese drywall to natural gas drilling and the world’s water resources. SEJ honored 18 entries in six categories. The winners include radio, TV, books, as well as daily print and magazines.

Reporters, editors and journalism educators who served as contest judges pored over the 207 entries to choose the finalists representing the best environmental reporting in print and on television, radio and the Internet. SEJ honors this year’s winners Sat., Oct. 22, 2011, at a gala ceremony at the Setai Hotel in South Beach, Miami, during SEJ’s 21st annual conference. View the winners list, links to entries and SEJ’s 2011 distinguished judges on SEJ.org.