Announcing the winner of the

August 23, 2019 — The Nina Mason Pulliam Award judges had the privilege of reading the winning projects from every category of SEJ’s 2019 Awards for Reporting on the Environment, and the difficult task of choosing one from among them for this "best of the best" honor. 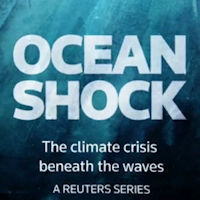 Reuters' "Ocean Shock" series, by Maurice Tamman, Matthew Green, Mari Saito, Sarah Slobin and Maryanne Murray, is this year's Pulliam winner. "Ocean Shock" is a deeply reported and stunningly presented look at an underwater crisis of global proportions. Evocative video clips, photos and graphics complement the powerful text, taking readers (and viewers) from the lobster trawlers of Maine to the fish feed factories of Mauritania, the shrimp ponds of Borneo and the streets of Portugal, where the sardines that are central to that nation's cuisine and culture are rapidly vanishing. The series illuminates the deep interconnections between human communities and underwater ecosystems, making clear just how much we have to lose as climate change, overfishing and an unsustainable approach to aquaculture take their toll on the world's oceans.

"We are thrilled to receive the Pulliam Award for the Ocean Shock series and to be recognized by the very journalists most attuned to the issues around climate," said Mo Tamman. "Climate change is one of the most pressing issues of our time, and our series illuminates its impact on oceans and the consequences on fisheries and the people who depend on them. It's an honor to receive this award, and we'll continue to tell this important story to the world."

The judges also granted an Honorable Mention to "Toxic City: Sick Schools," by Barbara Laker, Wendy Ruderman and Dylan Purcell for The Philadelphia Inquirer and the Philadelphia Daily News. The exhaustively reported series opens with a heart-stopping anecdote, the story of 6-year-old Dean Pagan, who eats the lead-tainted paint chips that fall onto his desk from a crumbling ceiling in his first-grade classroom because he doesn't want it to look messy and isn't sure if he's allowed to get up to throw them out. The investigative team examined five years of school district records and recruited school staff members to gather samples for lab analysis, which the newspapers had tested for lead, asbestos and mold. That work provided powerful evidence that Philadelphia's schools were endangering students, and prompted officials to allocate more than $15 million for emergency repairs and pass a law requiring remediation of damaged lead paint in school buildings.

>> Back to the Pulliam winners main page.

The Nina Mason Pulliam Award for the "best of the best" environmental reporting awards $10,000 to the winning entry. The prize also includes travel, registration and hotel expenses (up to $2500) for the winner, or representative of the winning team, to attend SEJ's annual conference and be recognized at the awards presentation ceremony Saturday, October 12, 2019 during SEJ's 29th Annual Conference in Fort Collins, Colorado.

The award was named in honor of Nina Mason Pulliam, a journalist, businesswoman and philanthropist, who with her husband, Gene, established Central Newspapers, Inc., a national newspaper corporation, in 1934. Upon her death in 1997, the Nina Mason Pulliam Charitable Trust was established to support the causes most important to Pulliam: helping people in need, especially women, children and families; protecting animals and nature; and enriching community life, primarily in her home communities of metropolitan Phoenix and Indianapolis.