The Society of Environmental Journalists honors the memory of Clem Henriksen. Clem passed away on August 21, 2015 after a difficult struggle with illness. He is survived by his son Miles Henriksen and his wife, Carolyn Whetzel. Carolyn is a much-beloved former president of SEJ and also a once and future conference chair for SEJ 2007 Palo Alto and Sacramento 2016. 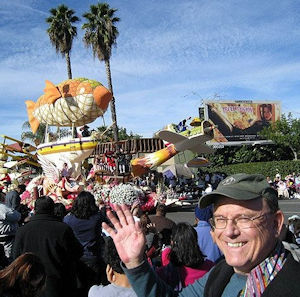 Carolyn described him this way: “Clem was a proud, native Californian who loved exploring the state's natural environment, especially the coast and mountains. He was a great conversationalist and storyteller, a voracious reader, fascinated by science and technology, and understood the crucial role of journalism and journalists in a democracy.”

She and their son Miles are asking that “in lieu of flowers, those wishing to recognize his passing, make a contribution in memory of Clem to the A.K. Smiley Public Library for purchase of new books (Smiley Library Gift Fund, 125 W. Vine St., Redlands, CA 92373) or to the Society of Environmental Journalists, P.O. Box 2492, Jenkintown, PA 19046.”

Clem’s was a familiar friendly face at SEJ gatherings over many years. He had a marvelous sense of enjoyment, humor and adventure. He made countless contributions to the organization as a volunteer trainer, tour leader, photographer and donor.

Clem Henriksen’s deep expertise in Geographic Information Systems combined with his profound understanding of journalism and his easy way of teaching served to greatly advance the use of mapping as a storytelling platform. The workshops and demonstrations designed for journalists that Clem developed for SEJ and other J-groups surely enriched news coverage on significant issues, benefiting millions of readers and viewers. Clem worked over three decades for Esri, a GIS technology and analysis enterprise that works with governments, NGOs, industries and academics “to create responsible and sustainable solutions to problems at local and global scales.”

Clem made a grand contribution to environmental journalism. But within SEJ, his good humor and ready friendship, the adventures he shared, leave the biggest legacy. His support for Carolyn in all she was doing for the organization over so many years also did not go unnoticed.

When news of Clem’s death reached SEJ on August 21, 2015, members and staff began sharing memories and sympathies. Jay Letto, SEJ co-founder and long-serving conference director, noted that Clem's support for Carolyn in all she was doing for the organization over so many years was key to her participation:

“Carolyn lives, breathes and embodies what SEJ is all about, that is, dealing with a difficult profession, in an increasingly difficult world, and finding that this great cooperative effort within SEJ leads to great camaraderie and close friendships, and increased passion about our profession and compassion for each other. Clem was affectionately coined 'First Dude' shortly after Carolyn was elected president, by an astute Don Hopey, and he wore the label well, contributing to SEJ's collective efforts in countless ways, and always with a warm smile on his face. Clem will be missed.”

Nancy Gaarder, reporter for the Omaha World-Herald and SEJ 2015 co-chair, wrote, “I was lucky enough to work with Clem on one of the mini-tours during the 2012 conference in Lubbock. He was kind, reassuring and supremely competent. Bill Kovarik is right (see below). Clem had a knack for 'we'll make it work.' I think what I liked most about Clem, though, was his friendliness. If Clem was in a room, even a cavernous ballroom, it shrank and became comfortable.”

Bruce Ritchie (Florida Environments) wrote, “I recall Clem educating reporters about GIS on a Thursday tour hike of the Appalachian Trail led by Amy Gahran. That led me to go out and buy a Magellan GPS device long before I was ready to make good use of it! I enjoyed seeing Clem at other conferences after that.”

Bill Kovarik (Unity College) wrote, “Clem was our touchstone for high tech. He worked for Esri, and while not a journalist himself, he married a great environmental journalist, so he had a lot of insight and a kind of bemused tolerance for our profession and specialization. Clem helped an entire generation of environmental journalists cope with the complexities of geographic information systems, satellite mapping, mapped storyboarding and, even better, he also showed us how to have fun doing all that. Geocaching for some of the hiking trips was part of the fun. Whether he was leading an SEJ session or advising one, he had the best teaching philosophy. He was always there when needed, and also very encouraging when others started to pick up the task.

"Clem was an invaluable advisor for computer lab training sessions when Ken Ward and I chaired the 2008 conference in Roanoke. The sessions seemed like a good idea but adding them into the mix was daunting, given the many other things going on. We started to wonder if we were doing the right thing, but Clem remained steady, cheerful and optimistic. Apparently he'd seen lots more complicated problems than that, and he said, 'You guys are lucky to have this kind of problem. Don’t worry, it will work. We'll make it work.' And it did. So I’m not going to worry right now, but like everyone else who knew him, I will miss him.”

NOTE: To share your memories of Clem in the comments section, or to read those shared by others, please log in, then return to Clem's page. After you've logged in, you may have to refresh/reload Clem's page to see the Comments function.