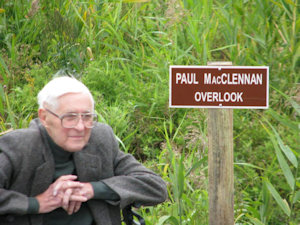 "Paul MacClennan, the guy who did some of the earliest and strongest reporting on the Love Canal story in the late 1970s and worked it for years as it became a huge national issue, died on Monday this week. He was 91.

Paul was a gentleman, a journalist and a proud SEJ member.

He was a fixture at SEJ conferences like this one for many years, where, wearing a bowtie, he could sometimes be found at a table in the bar with a martini in front of him, his wife Patricia at his side and a crowd of friends and colleagues jockeying for position around him.

He was SEJ’s long time elections chairman, a job he was given after observing several early board elections and informing Chris Bruggers that the process was so messed up that 'you’re going to get arrested.'

Chris said, 'Well Paul, why don’t you oversee it then?'

Paul joined the The Buffalo Evening News as a reporter in 1953, covering local government, according to an obituary in The News. In 1971, while covering the Attica prison uprising, he was the pool reporter on a panel that interviewed inmates inside the prison. He and others at The News received numerous awards for their coverage.

He established an environmental beat in the early 1970s and started an opinion column that often advocated for the preservation of the Great Lakes. In 1972, Paul attended the first United Nations Conference on the Environment in Stockholm, Sweden.

Beginning in 1977, and continuing for more than a decade, the obituary said, he covered the public health crisis that resulted from the massive dumping of toxic waste in the Love Canal area of western New York decades earlier.

He was a past president of the Buffalo Newspaper Guild and founding member of the Buffalo Chapter of the Society of Professional Journalists. Paul retired in 1991, but continued his column for 10 more years, and founded and edited Greenwatch, an environmental newsletter.

In 2000, he was the second winner of SEJ’s David Stolberg Meritorious Service Award.

My editor at the Pittsburgh Post-Gazette, David Shribman, then a young reporter at his first newspaper job, worked with Paul at The Buffalo News on some of the early stories involving Love Canal and counted him as a caring mentor and then a friend.

He wrote this in a memorial about Paul:

'His legacy to us, and to Buffalo, was his role as an archive of the environment in Western New York. He shamed government officials who did not do their duty to clean up the industrial pollution and black ooze that ran through Buffalo¹s environs. He was a leader of a proud cadre of true investigative, advocacy journalists who lived to protect the public — and who never sought credit for doing it. We miss him already.'