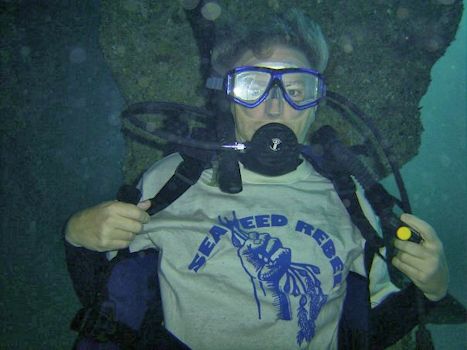 If there’s one thing SEJ’s 2014 conference on Risk and Resilience taught me, it’s that New Orleans is a deadly serious town.  What with its killer hurricanes, oil slicks, shredded swamps, sea-level rise and invasive Formosa termites (quite tasteless until panfried with Nutria sausage in a light red pepper sauce), I arrived ready to experience trauma, injury or possibly death only to be disappointed.

I missed most of the Wednesday sessions on disaster: "Disasters and Extreme Weather," "Disasters: The Science," "Disasters Knows No Borders" (killed off by Amazon years ago) and of course Trauma (see "Treme" Season One). I was expecting a mass casualty event at the Hilton reception that night but the AC (Arctic Conditioning) had been adjusted just shy of hypothermia.  That may have explained the chilly atmosphere when former Pentagon spokesman (now BP VP) Geoff Morrell, having helped us understand our successes in Iraq, offered to explain the media’s failure to publicize BP’s partnership with nature noting the Gulf’s “remarkable resiliency,” the gently wafting evaporation from sweet Louisiana — dare we call it crude — oil and BP’s post-incident efforts to leave the beaches “in better shape than they’d been in years.”  Heck, the company even paved the ocean bottom pro bono.  Now some might say BP talking about the resiliency of the Gulf is like a Vatican spokesman talking about the resiliency of children, but I say if those dolphins were so stressed why were they all grinning?  Besides, the reception’s black drum was delicious, even if it was red drum before 2010.

In contrast, former Army General and Hurricane Katrina adult Russel Honoré appeared to be fronting for the cetacean lobby.  “Mr. Dolphin ain’t here and he took a bad hit,” he claimed before charmingly trash-talking big oil and suggesting, “If you’re not on the edge of getting fired every day, you’re not doing your job” (or you could be a newspaper reporter). SEJ Awards were given out to many deserving journalists.  If Rachel Carson had been there no doubt the podium would have been covered by a fine dusting of ash.

Thursday’s field trips were heavy on the precautions so no one got lost in a marsh or chemical corridor, fracked, torn up by an oyster reef or found guilty of "gross negligence”" by a federal judge (OK, one exception). Also, there was a decision not to take the "After BP" tour folk on a boat ride to an offshore rig because the conditions were too rough (on Wall Street following the Judge’s ruling). I was part of the "If the Gators Don't Get You... the Sinkhole Will."  It sounded promising, but we ended up wearing life-vests on a road leading to where the collapse of a 3-mile salt dome mined by a Texas corporation left the landscape scarred by an idyllic 35-acre bass lake. A torrential downpour and lightning that evening did take out the hotel power briefly but before you could say "extreme weather" all that was left behind were wet t-shirts that won’t even get you a string of beads in NOLA.

Friday and Saturday’s panels also proved lively but non-lethal. They covered everything from tigers and levees and bears, oh my (studies suggest rapid environmental change in the Arctic can turn some stressed animals into bipolar bears) to my own in-depth panel on the ocean (insert fish pun here) to a freelance pitch slam that sounded like it could lead to serious injury but instead resulted in a few 50 cent a word front-of-the-book assignments, so long term starvation remains a real possibility.

On Friday afternoon Secretary of Interior Sally Jewell identified "three megatrends" including resources are limited, young people are "transformational" and climate change is real.  She also "pitched" three stories: climate change and ski resorts, the state of conservation in congress, the 100th anniversary of National Parks.  Her talk and suggestions demonstrated the kind of optimistic yet cautiously innovative approach that makes me miss Gale Norton.

Of course there was only one way SEJ could top the excitement of the Secretary’s talk, and that was to follow it with the annual board meeting. The Friday night beat dinners provided us another chance to appreciate the amazing diversity of Louisiana’s living resources by eating them, invasive species and all.

The Saturday mini-tours were no big thing. I was torn between the lead paint tour, the scrap metal tour and the Audubon interspecies cat-cloning lab (see "Cat People" starring Natassia Kinski).  I decided to instead do research on the measurable differences between high humidity air quality and chlorinated swimming pool water.

Saturday Night's Rock 'n' Bowl bacchanal with its open bar, line dancing and drunk bowling proved to be the best thing since the Napa Earthquake. This was followed by an acoustic survey of French Street where one insensitive SEJer kept shouting "Give me another hurricane," to a barkeep who may have been a Katrina survivor.

The conference ended not with a bang but a hangover over eggs and biscuits at the Zoo’s author talks (the state of publishing being an acknowledged catastrophe).  Then it was on to the airport and, since it has no Singapore Airline connections, nada.

I’m beginning to think that the problem with environmental journalism is that despite the occasional sharknado (and remember, no single weather event can be linked to climate change just like no single Lance Armstrong Tour de France victory can be linked to his doping), most of our stories — bark beetles, harmful algae blooms, the extinction of tigers and metropolitan dailies — lack the immediacy of hard breaking news such as Prince William and Kate siring young.

Still, I’m not giving up on NOLA yet.  Having reported on Hurricane Katrina in 2005 and the BP blowout in 2010, I’m thinking I might be back in 2015 when Godzilla attacks.   If not I could always tag along with a tornado chaser to one of those towns you only hear about when they’re blown away, you know, like Norman, Oklahoma [site of SEJ's 2015 annual conference].

David Helvarg is the founder and executive director of Blue Frontier. He is the author of six books including the upcoming paperback edition of "Saved by the Sea – Hope, Heartbreak, and Wonder in the Blue World." As a reporter he’s survived four wars, three hurricanes, two oil spills, one shipwreck and 14 SEJ conferences.