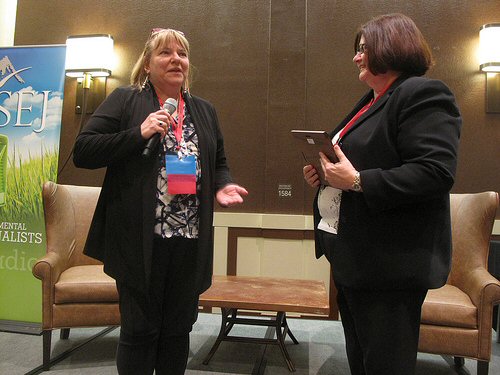 "Every year SEJ recognizes a member for his or her exceptional volunteer work with the David Stolberg Meritorious Service Award, named after the founder of SEJ.

"Stolberg died last year at the age 83. He was a 38-year veteran of the Scripps Howard news organization where part of his job included duties for the Scripps Howard Foundation’s annual Meeman Awards for excellence in environmental reporting. Stolberg believed 'in the value of networking, of the subliminal training that comes from the association with one's peers. Fortunately  for all of us, he convinced Meeman Award winner Jim Detjen to work other journalists in making SEJ a reality.

"Look around this room — it's filled with SEJ volunteers. They're the ones who organize this event from the tours to the concurrent panels, plenary sessions, and more. Without them SEJ could not achieve even a fraction of what it does.

"Volunteers expand the group's reach and significance in many ways.

"Take for example the volunteer freelance task force. It's responsible for creating the freelance directory on our website and for organizing today's day-long session on the business of freelancing.

"We have so many hard-working and devoted volunteers, so selecting recipients of this award difficult.

"This year's Stolberg honoree has been a passionate supporter and volunteer since SEJ's beginning. She's a founding board member and at the conferences, routinely tackles some of the toughest topics. This year it’s Poisons in the News, a discussion about media coverage of toxic chemicals — PLUS a minitour titled Epigenetics: Rewriting Nature vs. Nurture.

"Janet Raloff has been covering the environment, energy, science policy, agriculture, and nutrition for Science News more than three decades.

"She helped plan and craft the Baltimore conference, sharing her knowledge and experience in suggesting field trips, speakers, and session topics. Since 2004, she’s been a volunteer SEJ mentor and recently agreed to take on her fifth 'mentee.' Only three other mentors even come close to that record. [Read about SEJ's mentor program here.]

"One member who has worked closely with her said:

"'She exemplifies the integrity and generosity that make SEJ such a special organization. Perhaps her most important contribution of all is that she helps other members make sense of the science behind so many environmental stories.'

"Another said: 'She's the soul of SEJ, committed to her craft and to helping others understand the intricacies of environmental science.'

"Please join me in congratulating Janet, Senior Editor at Science News, the 2012 winner of the Stolberg award."

Back to main Stolberg award page.