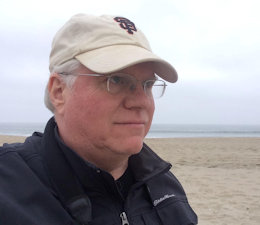 The David Stolberg Meritorious Service Award recognizes an SEJ member for their exceptional volunteer work. Nominees may not be a board member or anyone who is paid by SEJ.

Volunteers are the lifeblood of this organization. Member-volunteers organize tours and panels for the conference, implement the awards program, contribute to the SEJournal, serve as mentors and sit on any number of committees. This conference could not happen and SEJ could not be successful without our members lending their time and sweat in selfless service as volunteers.

This annual award honors exceptional volunteer work by an SEJ member. It was created by the SEJ board in 1998 and named in honor of one of SEJ's founders, David Stolberg.

This year’s recipient served on the SEJ board for more than a decade beginning in 1997 and served as SEJ president from 2000 to 2002. Since stepping off the board in 2010, he served as co-chair of the SEJ Awards Committee. As co-chair, he spent countless hours seeking awards judges, re-writing awards category descriptions and refining one of SEJ’s signature programs.

Over the last two years, he has served as SEJ’s future conference sites chair, pitching our conferences to universities and serving as our initial conference funding and logistics negotiator with potential hosts. It’s partly because of his hard work that SEJ’s conferences land where they do.

I think of this year’s recipient as Mr. SEJ, one of our longtime members synonymous with SEJ and environmental journalism. You’ll see him around leading tours, moderating panels and serving as gatekeeper for SEJ’s Facebook page.

He’s a reporter for InsideClimate News and previously covered the environment for about 18 years at the Louisville Courier-Journal in Louisville, Kentucky.

It’s my distinct honor to give this year’s Stolberg award to Jim Bruggers.

This annual award honors exceptional volunteer work by an SEJ member. It was created by the SEJ board in 1998 and named in honor of SEJ founder David Stolberg. Nominees may not be a board member or anyone who is paid by SEJ.