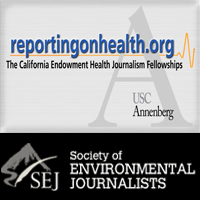 It’s not easy for journalists to undertake testing on humans, nor should it be. But testing for the body burden — the human body’s levels of chemical pollutants that can cause cancer, birth defects and other problems — can add powerful context to health and environmental storytelling.

In this hour-long webinar, you’ll get ideas and tips from two veteran environmental journalists, Douglas Fischer and Janet Wilson, who have used biomonitoring in their work. Sponsored by Reporting on Health and the Society of Environmental Journalists.

Douglas Fischer is an award-winning journalist and editor of DailyClimate.org, a nonprofit, foundation-funded news service focusing on climate change. Fischer has spent 16 years in journalism, including eight years covering the environment for the Oakland Tribune and five years at the Fairbanks Daily News-Miner in . He started his career at Newsweek. His articles have won international recognition, including an Award of Merit from the inaugural Grantham Prize, the world’s largest journalism prize, and most recently an Earth Journalism Award from Internews for his climate coverage. He is a board member of the Society of Environmental Journalists.

Janet Wilson is a veteran journalist and communications expert based in southern California. As an environment reporter and editor at the Los Angeles Times, she covered everything from inner city neighborhoods grappling with deadly soot and hexavalent chromium to White House officials quashing scientists’ findings on ozone and climate change. Wilson was part of teams honored with 2008 First Place awards by the Associated Press and Los Angeles Press Club for wildfire coverage. She was a frontline reporter on the Times team that won the paper’s 2004 Pulitzer Prize for breaking news. She has also worked with grist.org, Environmental Health News, the Detroit Free Press, Boston Globe, New York Daily News, CNN, ABC News “Nightline” and Christian Science Monitor. She currently works with the program in public health and other researchers at the University Of California-Irvine.

Reporting on Health is an online community for people passionate about fostering great health and medical coverage of our communities. ReportingonHealth provokes conversations about health journalism, blogging, and storytelling. It provides its members with a place to swap ideas, to showcase their work and to benefit from our reporting toolkits and tip-filled blogs. A project of USC Annenberg’s California Endowment Health Journalism Fellowships, ReportingonHealth is funded by a generous grant from The California Endowment.

The Society of Environmental Journalists is the only North-American membership association of professional journalists dedicated to more and better coverage of environment-related issues. SEJ’s mission is to strengthen the quality, reach and viability of journalism across all media to advance public understanding of environmental issues. SEJ provides critical support to journalists of all media in their efforts to cover complex issues of the environment responsibly.