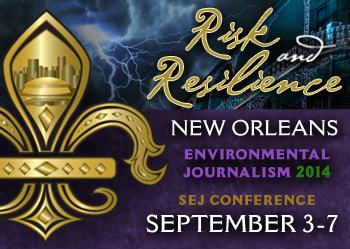 New Orleans and south Louisiana are the poster children for both risk and resilience in the 21st Century. Thus, it’s no surprise that we’ve chosen risk and resiliency as the theme for this year’s conference in the Crescent City. The lessons learned here from Hurricanes Katrina and Rita have rewritten the rule books for how to reduce risk from disasters and how to respond in their aftermath.

Whether it’s the Army Corps of Engineers’ rewriting the rules on how to build levees and other water structures to withstand the effects of hurricane storm surges and interior flood waters, including allowances for sea-level rise caused by global warming, or the response of non-profits like Habitat for Humanity — pairing with New Orleans jazz giants Harry Connick Jr. and Branford Marsalis — targeting the city’s musicians made homeless by Katrina with inexpensive — and Leed-certified — new homes, or the continuing struggles of the Isle de Jean Charles Band of Biloxi-Chitimacha-Choctaw Indians to find a way to live in their traditional village outside an under-construction new levee system, the area is serving as a blueprint for how to deal with risk and resilience.

We’re also well positioned to discuss the effects of the BP oil spill on wildlife big and small, from the spill’s possible links to the deaths of hundreds of bottlenose dolphins in Barataria Bay to potential long-term effects of state efforts to keep oil out of wetlands on oyster and shrimp production.

Add to that the state’s efforts to take advantage of the disastrous BP oil spill to provide initial financing for a wide array of coastal restoration projects that are at the heart of Louisiana’s $50 billion, 50-year plan to both rebuild wetlands and barrier islands and increase protection to populated areas from storm surge. Louisiana already is seeing how the lessons learned in designing and building restoration projects within its borders are being exported to communities facing similar sea-level-rise challenges, such as Vietnam.

We’ll also have time to party, with the conference hotel on the edge of the French Quarter and within walking distance of dozens of the nation’s best restaurants.

Find all the conference information here.