The World Changes and Twirls Us Back Toward Place 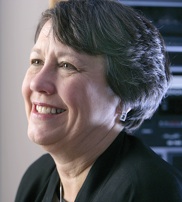 I'm sure that reading National Geographic in my childhood laid the groundwork for what I thought was my personal theory that geography is destiny.

When I visited Central America during the 1980's, I made the connection that, because the region is constantly rocked by earthquakes and erupting volcanoes, the ground beneath peoples' feet is truly unstable, and that in turn, has led to Central America's unstable politics. And later, visiting Japan in the 1990's, I realized the profound influence being an island nation made up of overwhelmingly homogenous people has had in making Japanese culture and politics insular.

I was reminded again of this theory in January, when SEJ's board met at Arizona State University in Phoenix. ASU has both a young and rapidly growing Sustainability Institute and a journalism school — The Walter Cronkite School of Journalism and Mass Communication, and SEJers organized a panel on the financial plight of journalism. Among the professors the "Cronk" has recently snared: former CNN anchor Aaron Brown, Steve Doig, late of the Miami Herald, former Sacramento Bee editor Rick Rodriguez, Kristin Gilger of the Salem (OR) Statesman-Journal and the Times-Picayune, and new media writer Dan Gillmor, who ditched his column at the San Jose Mercury News to start the first blog by a mainstream journalist, and who now heads ASU's Knight Center for Digital Media Entrepreneurship. The J-school also draws heavily on Arizona journalists from all media to be guest lecturers.

What was most striking for me was how ASU has grown as an institution exactly as the city itself has grown: sprawl. ASU has even incorporated sprawl into the design of its campus and content within its Global Institute of Sustainability — the first of its kind. Director Jonathan Fink told us that the Institute's founders literally gathered up all kinds of sustainability-related pieces and programs and left them in their de-centralized buildings all around the city after the launch. Now, Fink says, ASU treats that organic sprawl as a creative force, encouraging interdisciplinary connections and collaborations — notably in the school's "Decision Theater," a laboratory for science-based game-playing and policymaking about things like pandemic flu.

What does all this have to do with environmental journalism? For starters, I'm convinced that an awareness of "sense of place" adds a deeper dimension to our reporting. What is nature writing if not an exploration of very particular places? And I mean nature writing in the broadest sense, including writing about PCBs, CFCs, or CAFOs.

There's nothing like an SEJ conference, and especially an SEJ field trip, to bring home the connections among a place's physical geography — minerals, trees, plants, animals, birds, fish and bugs, the economy those resources provide to a place, and the culture and politics of a place's people.

Before the age of transience arrived and people started moving several times within their lives, geography was the major determinant in our lives: the characteristics of the land in our home place shaped the culture we grew up with, and the local natural resources defined the local economy.

SEJers discover this every year when the annual conference moves to a new location. This past year, in Roanoke, we encountered Appalachia, a region where mountains wall off small hollows and separate population clusters, leading to tightly knit small communities. That isolation produced unique traditional music, crafts, and herbal medicines, all of which endure today. Once the coal companies moved in to mine the Appalachian Mountains, people broke their geographic isolation by joining the union.

Compare Appalachia's geography to that of Madison, Wisconsin, where SEJ will hold our 2009 conference in October. Instead of isolated mountain villages, the Midwest is wide, flat and open, sliced by rivers and dotted with glacial lakes, with small rounded hills — perfect for raising dairy cattle and growing grain. Grain led to flour mills, and railroads, and manufacturing. When power got overly concentrated in the hands of robber barons during the Industrial Revolution, workers and farmers in Madison (and across the Midwest) became a hotbed of the agrarian Progressive reform movement.

This notion that geography is destiny may become even more important as climate change accelerates and the impacts become more evident. For one thing, climate change may erode, or even erase, what we now think of as the traditional sense of place. For another, there could be mass migrations of people away from their traditional homes to escape intolerable conditions — drought, floods, heat, cold and rising seas. Yet other populations could be stuck in changing places while the natural character of those places that shaped the local economy and culture disappears.

The intersection between a "sense of place" and the prospect of climate change has spawned new academic experts: biogeographers, paleobiogeographers and cultural biogeographers, whom SEJers can find at http://www.biogeographer.org/ — one of many intriguing sub-groups of the Association of American Geographers: http://aag.org/sg/sg_display.cfm

Thanks to climate change, the global economic crisis and, perhaps, the arrival of peak oil, the short happy life of New York Times columnist Tom Friedman's "flat world" may come to an abrupt end. If the cost of air travel and international shipping rise beyond our means and our super-mobile lifestyle of the last halfcentury ends, the world will become very local and very, very round again. And the job of journalists will be to discover the new "sense of place" in a transformed world.