Samples Mine in WVA. This picture is made up of 27 separate exposures merged into one, by Dennis Dimick, executive editor, National Geographic.

Wendell Berry introduced his reading — called "Speech Against the State," which he penned earlier in 2008 for a rally in Frankfort, Ky., against abusive coal mining in Kentucky — by saying that "mountaintop removal is the ecological equivalent of genocide. It's that bad. It's that big a sin. It's permanent damage to the world for the sake … of the briefest possible utility. Coal is of use only in the moment it's on fire. Whereas the forest and soil destroyed in order to get it out is a …permanent good to us and everything else in creation."

In the speech, Berry recalled his early awakening to the horrors of strip mining when native Kentucky lawyer and writer Harry Caudill spoke in the Knott County courthouse of "the gleeful yahoos who are destroying the world, and the mindless oafs who abet the 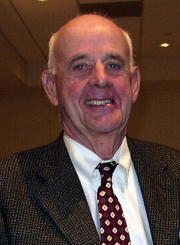 m." Today, Berry said he hopes for a turning sentiment against the coal companies, as he noted a tenfold increase in the number of protesters there that day in Frankfort.

"Surely they (the members of this government who represent coal corporations) will notice, more to their dismay, that many of this increase are young people. If this General Assembly and this Administration give notice as usual that they are blind by policy to the ongoing destruction of the land and people they are sworn to protect — and if you, my friends, all other recourses having failed, are ready to stand in the way of this destruction until it is stopped — then I too am ready."

Berry, Pancake and Giardina discussed the psychological wreckage for those who live with mountaintop removal, the media's coverage of it and the need for stories to galvanize the world against the destruction.

"There are two ends of this problem for writers," Berry said, "and I think journalists ought to be aware of both of them. It is possible to braid up this suffering into a public statement like my speech here. And that's necessary to be done. It's the approach to the problem that I have to take. I don't live in the coal fields; I live down river. The stories I'm authorized to tell are different than ones that Denise and Ann are authorized to tell …"

"But you have to see," Berry said, "and this is most moving, that the public statement can be unbraided into thousands of stories so that there is a public suffering that means nothing if it isn't understood as compounded of an almost infinite private suffering…"

Berry read from a recent newspaper account of the coal industry asking for more lenience from regulators. "The (rule) revision would be to minimize the debris as much as possible but would also let them skirt the 100-feet buffer requirement if compliance is determined to be impossible…"

Then Berry said: "Harry Caudill once told a jury — he was defending some poor soul against a corporation — that the law was the only net ever devised to hold the little fish in and let the big ones out….This is a good example of that. Minimize and possible and impossible are utterly worthless as law."

In response to a question about the importance of story, Berry said, "A story I've always liked to tell is of the French writer Andre Gide. This is in one of his journals. He was in Tunis while that city was being bombed in World War II. He was old, couldn't sleep. I think he had a skin condition that troubled him. He couldn't submit himself the indignity of trying to save his old life. So he'd sit in his room and watch the bombing."

"Then he would wander out in the morning and watch them trying to rescue the people who had been buried under the debris. And he made the point I think always needs to be made. Thousands of sufferings, he said, make a plateau. It's like that bed of nails you know that you can lie down on. But one death, one instance of suffering, one Lear, one Hamlet, he said, is the point of sorrow."

Berry said he didn't understand the Christian movement that preaches that the Lord is returning so there's little need to worry about such earthly issues.

"I don't understand this reaction to the rapture," Berry said. "It is fact we don't know the day or the hour. It could come at any time and when it comes it could solve a lot of problems...But if the end is at hand, you need to get your ass in gear and be found doing right when it comes."