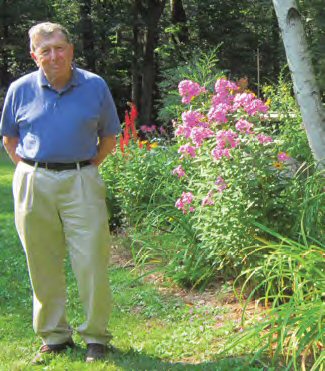 Author Shabecoff in the garden of his home in Massachusett's Berkshire Mountains.

SEJournal offers this new feature, in which our book editors interview published authors. In this issue, SEJournal’s Tom Henry speaks with former New York Times staff writer and environmental journalism pioneer Philip Shabecoff about how and why he wrote his latest book, “Places: Habitats of a Human Lifetime” (Becket Mountain Books, $12.50).

SEJournal: “Places” is part memoir and part reflection of settings that have inspired you. What part of it came easiest for you to write and why?

Shabecoff: They were equally easy because the memoir part sprang out of my reflections about those places. The hard part was leaving out the many other places that were important and memorable to me.

SEJournal: What inspired you to write it? How did you plan it out and what advice would you give to others who feel they have a good story to tell?

Shabecoff: I had several motives. One was my deep unease of how little regard our civilization seems to give to places and how, as a result, we human beings are blithely trashing the planet, which is our only home. Another was to provide myself and others a record of some of the places that were important to me and to describe why they were. A third was polemic: to urge people to think about the places of their lives, why they should be cherished and protected and what is needed to do so.

SEJournal: Why did you choose to self-publish it, instead of seeking an agent and a big publishing firm?

Shabecoff: I self-published because I couldn’t find a major publisher to take it. The publishing industry has changed dramatically in the past few years and is largely limiting itself these days to books that are likely to provide a substantial financial return. My previous book [“Poisoned Profits: The Toxic Assault on Our Children”, co-authored by his wife, Alice Shabecoff] was published by Random House, but that was five years ago.

SEJournal: For this edition of SEJournal, we reviewed “State of the Heart: South Carolina Writers on the Places They Love.” It’s not an environmental book, yet — in the big picture — it reminded us how all pollution controversies seem rooted in mankind’s fundamental desire to protect a sense of home. How can environmental writers better convey that message in their news writing, i.e. connect the dots between what’s at stake with policy decisions that affect science, nature and our personal well-being?

Shabecoff: This question kind of answers itself. As you say, we need to connect the dots between science, policy, the condition of the natural world and our personal comfort. I would add that all of us, particularly policy makers and corporate leaders, need to raise our line of sight above the immediate and look at the consequences of our actions for our posterity. It is not just environmental writers, but all journalists — political, science, economic, cultural reporters — who should examine and expose the consequences of our greeddriven misuse of our habitat.

SEJournal: A lot of people are nervous about the state of journalism in general, but environmental coverage in particular — especially at your former paper, The New York Times. How do you assess the current state of affairs and what will it take to reverse the trend?

Shabecoff: When I started writing about the environment for The Times in the 1970s, there were only a handful of journalists who covered these issues. Now, as the SEJ membership demonstrates, there is a large cadre of knowledgeable, talented writers following environmental developments. The problem is that not enough of their stories are reaching the public and policy makers.

The disappearance of many newspapers, the financial woes of media companies that are quick to jettison environmental coverage, the concentration of media outlets, many in the hands of corporate interests antagonistic to environmental coverage — these are all reducing the public’s access to stories about what is happening to the environment and why.

As for The Times itself, I left there more than 20 years ago and no one I really knew is left, so I can’t give a reading on its thinking about environmental coverage. They abandoned their environmental team, which is another example of when the media hit financial trouble, environmental reporting is the first to go.

SEJournal: Pretend you are much younger, still gainfully employed at The Times, had all of the support you could imagine for the environment beat, and had free reign over what you could do. What issues, stories and/or projects would be at the top of your list?

Shabecoff: Ah yes, I would love to be much younger. If I lived in the fantasy world you posit, I would do what I urged my editors to do when I was still at The Times: I would inculcate deep environmental coverage into every editorial department of the paper. As I noted above, every policy and economic story, civil rights, almost every foreign affairs and science story, too, ultimately has some environmental consequence. As John Muir said, everything in the universe is hitched to everything else. I certainly would have an op-ed columnist who concentrated on environmental issues, particularly policy. In fact I think I would appoint myself to that job. As for issues on which I would concentrate, one crucial one would be the increasing corporate control of our society, including our government, and the effect it is having on our democracy, our environment and our lives. I would want a lot of reporting on the links between poverty, racism and environmental health.

Shabecoff: As I noted above, I am impressed by the number and quality of environmental writers compared to the 1970s when I started writing in the field. Environmental reporting is much more professional and knowledgeable and covers an amazing range of subjects. What is missing in much — but not all — environmental reportage is the linkage to what is happening to the rest of society. We pointed out in a second edition of “Poisoned for Profit” that the economic meltdown of 2007-2008 sprang from essentially the same roots as our environmental decline: greed, corporate arrogance, indifferent and inadequate government oversight, and the failure of the American people to understand what was being done to them. Environmental reporting can use more of this kind of perspective.

SEJournal: Given what you know about Washington politics, has the stalemate over climate change really surprised you that much? What observations can you make about how the nation’s collective understanding of that issue has evolved? What challenges do environmental writers face, especially in a downsized news industry, to make sure they’re getting the best information out?

Shabecoff: No, I am not surprised. The failure of the U.S. to act on climate change reflects the degradation of a functioning democracy. If money from Exxon, the Kochs and other fossil fuel and corporate interests can buy enough political power to block desperately needed action on a problem about which there has long been firm scientific consensus, then we are in serious trouble. I think public understanding of the climate change threat clearly emerged in the late 1980s and has been growing ever since. But public inertia and apathy over the issues have kept pressure on policy makers to a minimum. The same can be said of other mega issues such as the toxification of the environment and the tragic, irreplaceable loss of animal and plant species.

SEJournal: It’s been said that history repeats itself. As one of the early icons of environmental writing, what trends or observations about the 1970s do you see applicable to today or what do you expect will be applicable in the coming years?

Shabecoff: Unfortunately, few of the trends of the 1970s are now repeating themselves. Back then, there was a great upwelling of public concern and anger about what we were doing to our air, our water, our soil and our bodies. Congress responded with a burst of bipartisan legislative energy that produced a series of landmark laws to deal with these threats to the environment and the executive and judicial ways. The national environmental groups were inspired and effective. That was then. Today, there is little sign of significant activism and anger among the broad public.

As for congressional action, the thought of these people’s representatives, particularly the right wing, do-nothing Republicans, doing anything meaningful is simply risible. Even the environmental groups, while still staffed by talented, dedicated men and women, seem unable these days to have much impact on policy.

SEJournal: Nature can be humbling. What humbles you about it?

Shabecoff: I am profoundly humbled by the beauty and wonder of the natural world. Whoever or whatever created it, nature is an aesthetic masterpiece of endless variety. I am sitting here in my house on a mountain in the Berkshires surrounded by trees, grass, rocks, flowers. Down the hill there is a lovely little pond and the woods stretch around us for acres. We are regularly visited by black bears and wild turkeys. Several times a day, I walk around outside, a sense of peace and quietude settling over me as soon as I step outside. To me, a life without nature’s beauty is unthinkable.

* From the quarterly newsletter SEJournal, Fall 2013. Each new issue of SEJournal is available to members and subscribers only; find subscription information here or learn how to join SEJ. Past issues are archived for the public here.