The Proof Is in the Information: Be Reliable, Accurate and Fair 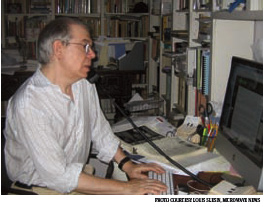 A scientist and advocate fascinated by a complex and emerging environmental issue decides to begin independently publishing a newsletter about it.

Early on, it's a struggle. He distributes his work in newsletter form, mailing out copies to a small but dedicated readership.

He toys with new ways to expand his publication; eventually facing the internet world, he converts to the web.

Now this self-made journalist's struggle to inform must hold some important lessons for today's environmental journalists. This one, for instance:Win subscribers by proving yourself as a reliable provider of information.

This hybrid science-journalist – we should have told you earlier – is Louis Slesin, who has published Microwave News since the 1980s.

What follows is an interview with Slesin that explores how he got started, his struggle to sustain and some advice for journalists exploring and reporting on science and environmental issues, especially the issue of health effects related to EMF (electromagnetic fields).

Q: Tell me a little about the genesis of Microwave News. Why did you decide to launch the publication? Did you have any experience in newsletter publishing? Had you previously worked as a reporter?

A: It all started in the mid-1970s when I was in graduate school and read Paul Brodeur's two-part series in The New Yorker on the health risks associated with exposure to microwave radiation. By the time Paul published the articles in book form – The Zapping of America – I was working at the Natural Resources Defense Council (NRDC) on the regulation of toxic chemicals and genetic engineering. One evening, Paul dropped by our office and left copies of the book. I grabbed one and read it. I was hooked. I was soon devoting more and more of my time to the issue and wanted to work on it full time.

Q: What were the biggest challenges in establishing the newsletter as a trusted source of news and an economically viable venture?

A: Then, as now, the EMF (electromagnetic fields) issue was highly controversial. Many members of my target audience knew me from my advocacy work at NRDC and I had to convince them that I could be fair and accurate, reflecting the nuances and uncertainties in the field. This was especially true for potential corporate subscribers who had the deepest pockets. Another challenge was marketing. I am much better at research and writing than selling subscriptions. I could not afford to hire someone to help me build circulation. Instead, I decided to keep the overhead low and keep publishing while I built a reputation as a reliable source of information.

Q: Many independent journalists supplement their journalistic income with other activities, such as teaching. Have you done other things to support yourself while producing Microwave News?

A: The early years were tough and lean. I too did some teaching, but lecturers don't get paid very much and I decided that it wasn't worth it. Then, I made some editorial changes to expand readership. I started reporting on electromagnetic interference (EMI) —that is, the effects of the radiation on electronics and machines. (One example is a cell phone signal upsetting a cardiac pacemaker.) It was a natural extension of my reporting on human health effects. Unfortunately it didn't work. I learned the hard way that EMI engineers don't like to pay for information.

My next try was more successful. I started a second newsletter, VDT News, on the health risks associated with working at video display terminals. Computer operators were growing more and more anxious as clusters of adverse pregnancy outcomes were being reported among office workers. Many blamed the radiation emissions from VDTs. Since we were already covering this in Microwave News, we repackaged the information and added coverage of ergonomics (how to avoid repetitive strain injuries). A bit later, I started a clipping service. My cash flow improved, but there was a downside. Running multiple publications requires a different skill set than being a reporter and editor. You become a manager rather than a journalist. By 1995, the circulation of Microwave News had increased considerably and we were also attracting advertisers. This allowed me to close down VDT News.

Q: Why did you convert from a printed newsletter to a web-based, non-subscription publication?

A: Two reasons. First, I wanted to slow down. Twenty-five years of never-ending deadlines had begun to take a toll. And secondly, a web-based newsletter – with no printing and no mailings – has a much lower cost structure. I don't have a staff anymore, except for a college student who comes in now and then to help out. It's quite liberating.

Q: You published the printed newsletter on a bimonthly basis. Items are posted on the website now much more often. How has reporting for the web changed the way you approach your work? Obviously, you can report with much more immediacy, but has something been lost, too?

A: We used to try to cover all the major EMF issues. Now I focus on those developments that I think are most important. Another major advantage is that I can devote more time to a single story. Sometimes, I write items every day and at other times, a week or more will pass between posts.

A major loss is my paid subscription base. It's no secret that most web sites have a hard time generating income. One mitigating factor has been our track record. Lots of people continue to send us checks to keep Microwave News alive —nevertheless, I now must take on other projects to supplement my income.

Q: Now I'd like to ask a few questions about the issue that you're a respected journalistic leader in covering possible human health effects related to electromagnetic fields and non-ionizing radiation fromsources such as utility power lines and cell phones.

First, is it possible to summarize the basic trajectory of this extremely complex issue over the period when you've been writing about it – the evolution of scientific understanding and regulatory response? For newcomers to the issue or those who know only a little about it, what are the most important things to know and understand?

A: When I started out, most people had never heard of EMFs, and manysourcesdismissedthepossibilityof anyill effects.Someofmyearly interviews were very short. That changed. For instance, in 1993, USA Weekend, USA Today's Sunday supplement, asked its 33 million readers about their health concerns.At the top of the listwere electromagnetic fields!We had come a long way.

Back in 1980, the possibility that EMFs from power lines could lead to childhood leukemia was a curiosity. Today those initial concerns are supported by lots of other studies.What is still missing, however, is a widely accepted biophysical explanation for how this happens.

By far the biggest change has been the introduction of cell phones. They didn't exist 25 years ago; now more than 260 million Americans use them, together with two billion others worldwide. Even a small risk for an individual could be catastrophic for society as a whole.

Q: This interview is taking place not long after some events related to cell phones' possible link to brain tumors totally ignored."Why do you think that difference in coverage exists? Are things perhaps changing in the U.S. media with some of the recent developments I mentioned earlier?

A: The story lags in the U.S. because no one is applying pressure for change. Consumers Union is silent, as are environmental and labor groups. Another important factor is that no research is going on in this country, and that means there are few new findings being reported and therefore few news pegs. The media are loaded with ads for cell phones and I wonder whether this could be influencing the coverage. Americans love their cell phones and do not want to believe they could do any harm.

Q: What advice would you offer to journalists who are setting out to cover health questions related to electromagnetic radiation? Any advice for environmental journalists thinking about launching a newsletter/web site publication, whatever the subject?

A: Whether you are writing about power lines or cell phones, make sure you have the time to do enough research to get the necessary context. And don't lose sight of the fact that the EMF community is extremely polarized: Get a variety of viewpoints and be prepared to navigate around people's vested interests and personal biases. Before launching a new venture, check to see if there is a market for the product. People may be interested in what you want to do, but will they pay for it?