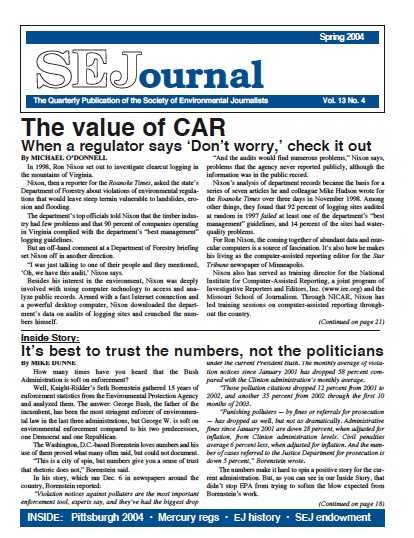 Cover: The Value of CAR: When a Regulator Says' Don't Worry,' Check It Out
by Michael O'donnell

Inside Story: It's Best to Trust the Numbers, Not the Politicians
by Mike Dunne

The Roots of E-Journalism, or Life Before Rachel Carson
by Michael  Frome

Media on the Move: Home Turf, Kudos, and Books of Environmental Destruction
by Elizabeth McCarthy

Issue in the News: Mercury: A Key Presidential Campaign Issue?
by Margie Kriz

The Beat: Sewage, Sludge and Tainted Water in the News
by Mike Dunne