"The Unconquered: In Search of the Amazon's Last Uncontacted Tribes" 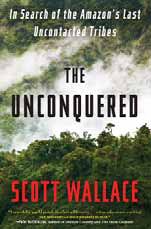 The Unconquered: In Search of the Amazon's Last Uncontacted Tribes

In 2002, veteran National Geographic freelance journalist and photographer Scott Wallace followed a 34-man team deep into the Amazon rainforests of Brazil in search of a mysterious group of about 200 indigenous people known only as the flecheiros — “People of the Arrow.”

By all accounts, this small band of native hunter-gatherers has never come into direct contact with the outside world.

They live in small, scattered villages at the headwaters of the Amazon near the Peruvian border.

But the purpose of this expedition wasn’t to contact these people, gain their trust, and then study their ancestral lifestyle. Instead, the goal was to make sure the flecheiros remain permanently isolated from potentially devastating contact with global civilization.

The Unconquered is Wallace’s first-person account of the team’s harrowing three-month trek through uncharted tropical forests looking for — but trying not to meet — the flecheiros.

A page-turning adventure story of the first order, the book is also a fascinating look at a new way of thinking about indigenous populations.

The leader of the expedition and Wallace’s guide is Sydney Possuelo, a household name in the Brazilian backwoods because of his defense of native tribes against ranchers, loggers and miners who seek to plunder the rainforest’s riches.

Possuelo, then president of FUNAI, Brazil’s Indian affairs agency, had already spearheaded a new concept in the management of indigenous peoples: Instead of trying to incorporate them into the Brazilian mainstream, why not create a protected preserve where they could continue to live off the land and maintain their way of life with no interference from missionaries, medical teams and mercenary prospectors?

But keeping the flecheiros safe is no easy task. The People of the Arrow are just one of dozens of tribes in the Amazon who remain isolated from the rest of the world.

FUNAI has confirmed at least two dozen such bands in Brazil.

According to Wallace, neighboring Peru has 14 or 15 such groups roaming its Amazon jungles. Others may exist in India, Nepal and the islands of Southeast Asia.

While it’s hard to imagine that “stone-age” tribes still persist in a world of cell phones, satellites and social media, it’s even harder to understand how difficult it is to police these isolated regions, to keep them free of outsiders who could endanger a way of life that has nearly disappeared.

As Wallace follows Possuelo and his team into the jungle, he encounters squatters who farm the jungle for endangered fish and turtle eggs, gold miners who ransack rivers and destroy their ecology in search of precious metals, and native tribes who live at the very edge of civilization.

At a stay in one native settlement, Possuelo discovers that villagers have occasionally spotted indios bravos — wild Indians — and he urges them to keep their distance. With no immunity to disease, even the briefest contact could devastate isolated tribes.

The climax of the story arrives as, deep in the heart of flecheiro country, two members of the expedition disobey orders and lead the team straight through a just-deserted flecheiro village.

Cooking fires still smoke as team members grab cultural souvenirs of the near-encounter: a broken arrow stained with curare, a deadly poison, and a blowgun.

Wallace and men of the FUNAI team camp that night in terror that a first-person encounter with the flecheiros could end in death.

Packed with details about rainforest ecology, indigenous peoples, and the perils of rainforest life, Wallace’s narrative is apt and penetrating. He wonders aloud whether leaving axes and cooking vessels for the “wild Indians” isn’t a form of contact that could ultimately alter the flecheiros' way of life. And he raises an eyebrow over the high-handed authority Possuelo attempts to exert on both expedition members and illegal trespassers of the indigenous preserve.

There’s no question the authenticity of Wallace’s story is genuine. But he leaves readers with the unspoken question: How long will South American governments such as Brazil’s be willing and able to protect these isolated people from contact with a world that will ultimately destroy them?

Karen Schaefer is an SEJ member and award-winning freelance radio reporter based in Kent, Ohio.