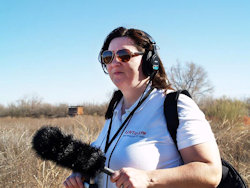 "Our Stolberg winner this year has been an absolute whirlwind of volunteer action since joining SEJ not so long ago. This member promotes SEJ far and wide, recruits new members, even pays their dues. Has never said no when asked to cover a task for SEJ, large or small, pulling together a conference session, helping out with the awards program, sharing news of opportunities to the listserv. But her signature contribution... Putting her passion for multimedia to work for SEJ recording and posting video of members talking about why they love this group, live streaming a session, running the conference App on Whova, organizing and Periscoping a road trip to this conference with a fellow member at her side.