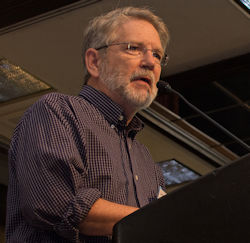 Volunteers are the lifeblood of SEJ. This conference [#SEJ2016] is proof of that. Member-volunteers chair the conference, lead tours, and plan and moderate the panels. Throughout the rest of the year they also implement the awards program, contribute to SEJournal, serve as mentors, and actively participate on committees. Without the generous efforts of volunteers, SEJ wouldn’t have the same reach or influence, and it wouldn’t be the same warm, grassroots organization we all have come to love.

And so in 1998, the board created an award to honor an exceptional volunteer and named it after SEJ founder David Stolberg. This year’s winner is well known for his years of service on the SEJ board, including two years as president. But this award recognizes the incredible volunteer work he’s done since then. He's served as a guiding light for the Fund for Environmental Journalism. He’s consistently delivered as a conference moderator, tour leader, and SEJournal contributor. He’s been generous with his expertise on the SEJ listserv and been a cherished advisor to our executive director. And perhaps most crucial now, in this time of decreasing government transparency, he’s led SEJ’s Freedom of Information task force—providing testimony, coordinating with other journalism groups, and addressing members’ concerns. Just two weeks ago he stepped in and called the Forest Service’s DC office when a member had trouble securing an interview. The interview was approved within minutes.

So a huge thank you, from all of us, to this year’s David Stolberg Meritorious Service Award winner—a long-time Baltimore Sun environment reporter, now the managing editor of the Bay Journal, Tim Wheeler.