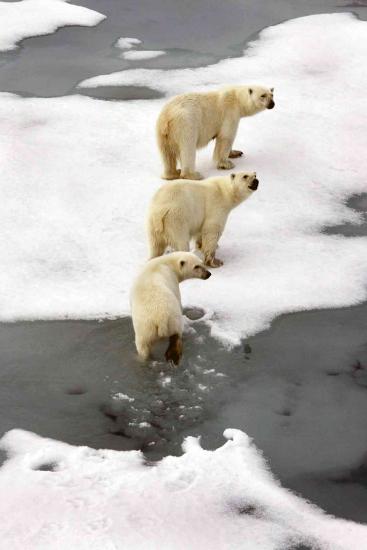 When Interior Secretary Dirk Kempthorne announced the listing of the polar bear as a threatened species in May, the political trench warfare over global warming flared up anew. Environmental groups professed surprise that a reluctant Bush Administration acted at all. Global warming deniers said the decision was ludicrous. They cited a polar bear population — a five-fold increase since the 1970s, a doubling since the 1950s, a quadrupling since the 1960s.

After wading through about thirty such references from readers of our CNN blog and hearing them from multiple radio and TV pundits, I got to thinking: Are any of these numbers true? And where do they come from? I embarked on a global quest, traveling by phone, email and Google, to find the truth. My first stop was Bjorn Lomborg's 2007 book, "Cool It: The Skeptical Environmentalist's Guide to Global Warming." Lomborg, the Danish economist whose work provides a torrent of talking points for Conservative pundits, says there were "probably 5,000" polar bears in the 1960's.

The book's footnotes cryptically attribute the Number to "Krauss, 2006."

Lomborg confirmed for me that the "Krauss" in question is Clifford Krauss, a reporter for The New York Times, who wrote on May 27, 2006, about the conflict between polar bear protectors and trophy hunters: "Other experts see a healthier population. They note that there are more than 20,000 polar bears roaming the Arctic, compared to as few as 5,000 40 years ago." http:// www.nytimes.com/2006/05/27/world/americas/27bears. html?pagewanted=2&_r=1

Krauss, now a Houston-based correspondent for The Times, told me he couldn't recall the source of the 5,000 number, but said that he understood the number to be "widely accepted." Lomborg also emailed me a reference for another, different figure he said he'd discovered after the book's publication: A report from the Soviet Ministry of Agriculture's S.M. Uspensky, who surveyed nesting sites on a portion of Russian turf and extrapolated an Arctic-wide population of 5,000 to 8,000 in 1965. http://pbsg. npolar.no/docs/Proc01_1965.pdf

(Let us pause for a moment of irony: Critics of the polar bear decision, predominantly political Conservatives, are apparently placing their chips on a fact that traces its lineage back to two info sources: The New York Times and the Union of Soviet Socialist Republics.)

Here's a quick tour of a few other reports of polar bear prosperity:

In a May 20 Los Angeles Times opinion piece, Jonah Goldberg took a whack at what he sees as quasi-religious overtones to conservation. Part of his backup? "Never mind that polar bears are in fact thriving — their numbers have quadrupled in the last 50 years." http://www.latimes.com/news/ opinion/comentary/la-oe-goldberg20-2008may20,0,315197. column?track=rss

But the March 9, 2007, story that Taylor referenced actually makes no mention of global bear populations – quoting one scientist as observing strong growth in one local population, in Davis Strait; and another scientist reporting global warmingrelated declines in the local population in Hudson's Bay.

Taylor adds a new number into the mix from a March 26, 2008, posting at the Heartland site: "The global polar bear population has doubled since 1970, despite legal polar bear hunting." http://www.heartland.org/Article.cfm?artId=22994

A May 12 New York Post op-ed piece by S.T. Karnick introduces still another number – this time with a source:

"The world polar-bear population is at a modern high — and growing. Mitch Taylor, a polar-bear biologist with Canada's Federal Provincial Polar Bear Technical Committee, notes that the bears now number about 24,000 — up about 40 percent from 1974, when fears arose about the bear's ability to survive over hunting by Canadian Eskimos and aboriginals." http://www.nypost. com/seven/05122008/postopinion/opedcolumnists/bear_baloney_110540.htm?page=0

From James Delingpole, a Times of London blogger, similar numbers, but different dates. And no source. "In 1950, let us not forget, there were about 5,000 polar bears. Now there are 25,000."http:// www.timesonline.co.uk/tol/comment/columnists/guest_con tributors/article2852551.ece

When we get to the retail level, the Arctic Urban Myth turns truly funky. We blogged about the polar bear ruling on CNN's SciTechBlog, and about 30 of the 350 responses cited some variation of the number. Here are some examples:

"Common Sense: Who are we kidding. There were 5,000 bears in 1970 and now there are 26,000. Most populations are growing. This is obvious global warming politics."

"Jay Merr: The global population of polar bears is 22,000, about double what it was just four decades ago. The environmentalists have taken control of the government and global warming is the scam of the century."

"PJ: They don't need protection at all, their population has increased more since the 1970s than the human population of any country on earth!"

But polar bear researchers say those old estimates were no better than guesses. Steven Amstrup, who led the USGS research on the current status of polar bears, emailed me from the field: "How many bears were around then, we don't really know because the only studies of bears at that time were in their very early stages — people were just beginning to figure out how we might study animals scattered over the whole Arctic in difficult logistical situations. Some estimated that world population might have been as small as 5000 bears, but this was nothing more than a WAG. The scientific ability to estimate the sizes of polar bear populations has increased dramatically in recent years."

Andrew Derocher of the University of Alberta added, "I have seen the figure of 5,000 in the 1960/70s but it is impossible to give it any scientific credibility. No estimation of any population was attempted until the early 1970s and even then, this was done very crudely for perhaps 10% of the global population and the estimates were highly questionable."

Thor Larsen of Norway's University of Life Sciences was actively involved in bear research back then. He recalls "Most data on numbers from the late 1960s and early 1970s were indeed anecdotal, simply because proper research was lacking. As far as I can remember, we did stick to a world-wide 'guestimate' of 20-25,000 bears in these years."

Another veteran bear researcher, Ian Stirling, emailed me, "Any number given as an estimate of the total population at that time would simply have been a guess and, in all likelihood, 5,000 was almost certainly much too low."

These and other scientists agree that polar bear populations have, in all likelihood, increased in the past several decades, but not five-fold, and for reasons that have nothing to do with global warming. The Soviets, despite their horrendous environmental legacy on many issues, banned most polar bear hunting in 1956. Canada and the U.S. followed suit in the early 1970s — with limited exceptions for some native hunting, and permitted, highpriced trophy hunts. And a curtailment of some commercial seal hunting has sparked a seal population explosion – angering fishermen, but providing populations in eastern Canada and Greenland with plenty of polar bear chow, leading in turn to localized polar bear population growth in spite of the ice decline.

The scientists also caution that we still don't have a firm count on these mobile, remote, supremely camouflaged beasts. All this uncertainty over the numbers — past and present —even gave some conservative bloggers pause.

Human Events editor Terry Jeffrey acknowledged the absolute uncertainty of polar bear numbers in a May 21 blog. Even so, isn't that reason to do nothing? he asked. "Before anybody tries to change the world to save polar bears … somebody should figure out how many polar bears there are." http://www.humanevents.com/article.php?id=26627#continueA

I hope this thoroughly clears things up.

PETER DYKSTRA is executive producer for science, tech,weather at CNN.