"No Way Home: The Decline of the World's Great Animal Migrations" 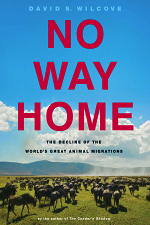 From one of America's leading wildlife experts comes No Way Home: The Decline of the World's Great Animal Migrations, an engrossing collection of stories about how nature's superhighways have been impacted by human activity.

Princeton University ecologist David Wilcove writes lovingly about the awe and beauty of migration while giving readers a look at the challenges for monarch butterflies, dragonflies, salmon, songbirds, bison, cranes, loggerhead turtles, wildebeests, whales and other forms of life wired to roam.

The prognosis is grim due to the footprint of the Earth's human sprawling population and the resulting habitat loss it has generated, compounded by climate change, pollution and other factors, from dams to skyscrapers to cell phone towers.

His writing has the heart and passion the book needs, well beyond the dryness of a scientific journal yet devoid of emotional, flowery rhetoric – all at an appropriate tone for the layman. There's little embellishment. The facts speak for themselves and are presented clearly and authoritatively.

Author of The Condor's Shadow: The Loss and Recovery of Wildlife in America, plus numerous scientific and mainstream press articles on wildlife conservation, Wilcove suggests the Earth is on the verge of losing some migration spectacles it has experienced for thousands of years.

In the case of salmon, extinction is not around the corner. "But it seems increasingly clear that the only migration most salmon will make in the future is the journey from the fish farm to the canning factory," he wrote.

Wilcove notes how a bird launching itself into a night sky – something done billions of times every spring and fall –- may seem like "an act of faith or courage."

Yet it's sheer instinct.

"That instinct tells the bird it is time to go, time to venture hundreds or thousands of miles to some other place where living conditions will be better for the next few months, as has been the case for generations upon generations of its ancestors," he wrote. "The bird travels without any knowledge of what may have happened to its breeding grounds, its wintering grounds, or any of the places in between since the last time it made the journey. It just goes," Wilcove continued. "In that respect, perhaps migration is an act of faith after all, a hardwired belief that there is somewhere to go and a way to get back."

Tom Henry is a journalist with 27 years of experience at Michigan, Florida and Ohio newspapers who created The (Toledo) Blade's environmental beat in 1993. He began writing a weekly environmental column for The Blade's Sunday news analysis section in early 2007.