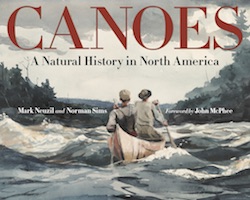 “Canoes: A Natural History in North America” has the heft and feel of a coffee table book. But calling it that doesn’t do it justice.

It’s certainly a visual feast of amazing photography and artwork — some of it rare and deeply archived.

But it’s also a whole lot more. Words and visuals combine to give the reader a real sense of how canoes and the art of canoeing itself have been part of North America’s cultural fabric all along.

As I went through this thick, weighty volume, a thought kept going through my mind: This is the real deal, a complete package. About all I’m missing is cool water splashing up on me as I navigate along a river or skim atop a lake.

And even if the subject matter leads you to believe this is a book that’s been done before, I’d argue it hasn’t — at least not with the passion, commitment to storytelling, history and tender loving care you find on these pages.

There’s evidence brought forth of canoe-digging tools thousands of years old. There’s writing about how canoes were used by French fur traders in Canada, as well as the significance canoes have had to Native Americans and First Nations.

And, finally, there’s a look at the combination of market forces and technological innovation that brought us modern marvels of aluminum, Kevlar, carbon fiber, plastic and other materials that ply through water for speed and, of course, recreation.

You’ll appreciate how such a simple vessel and paddle

have brought us closer to nature.

Through the journey of time, readers learn how canoes were invented, built and remade over time.

More importantly, though, there’s that moment of discovery — several of them, actually — that makes readers stop and ponder about the act of canoeing itself.

At several junctures, you’ll appreciate how such a simple vessel and paddle — whether of birch bark or fiberglass — have brought us closer to nature, stimulated our appetites about the inherent human ties to water and driven our instincts to casually explore and travel.

Think about it: All of this has been done while canoes have really only changed in materials, not fundamental engineering and design concepts.

The beauty of this book, to me, is how it takes such a basic object — a canoe — and enlightens the reader with a lot more than they’d expect to get.

Mark Neuzil is author, coauthor or editor of seven books, and a professor of communication and journalism at the University of St. Thomas in St. Paul, Minn., as well as a longtime SEJ member and former board member (and, full disclosure, a friend).

But more to the point, Neuzil’s also a former wilderness guide and summer park ranger, an avid outdoorsman who began canoeing in the 1960s with his family.

Similarly, his co-author Norman Sims, a retired honors professor from the University of Massachusetts Amherst and a past president of the International Association for Literary Journalism Studies who has written six other books, is a longtime whitewater canoeist with a small collection of antique Morris wood-and-canvas canoes.

John McPhee is, of course, no stranger to literary journalism. He has authored more than 30 books and has had his work published in The New Yorker since 1963. He received the Award in Literature from the American Academy of Arts and Letters in 1977, and was awarded the Pulitzer Prize for General Nonfiction in 1999 for his five-volume work on the geology of North America, “Annals of the Former World.”

Certainly, having a giant like McPhee, one of the world’s best-known canoe writers and author of a 1975 book, “The Survival of the Bark Canoe,” do the introduction to your book is a blessing. It’s a bonus. But with all due respect to McPhee, it’s just that — a bonus.

This is a book perfectly capable of floating on its own.