Environmental issues related to coal ash, the voluminous toxic residue that's left over when coal is burned, are nothing new to reporters in coal country. See the Inside Story interview with Tim Thornton, formerly of Virginia's Roanoke Times, on page 20 of this issue of SEJournal for one example. 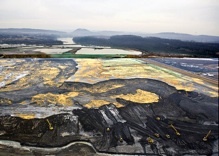 When a dam collapsed and a billion-gallon spill of liquefied coal ash in East Tennessee covered homes and farmland on Dec. 22, 2008, local and regional news outlets immediately responded. It took much of the national media a while longer, however, to acknowledge that such a huge environmental disaster was a major national story — and then to begin exploring the event's implications.

Media critics took note of how the coverage had followed this trajectory, with growing recognition of the importance of the spill itself and its broader significance. 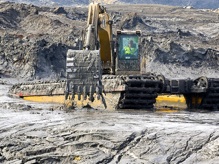 On Jan. 5, Peter Dykstra, writing in his Media Mayhem blog for Mother Nature Network (a.k.a. MNN.com), discerned a notable difference between the slow start of some of Old Media's national outlets on the story and the nimble performance of New Media's Twitter, facilitated by media consultant (and SEJ TipSheet contributor) Amy Gahran. Here's part of what Dykstra said:

Maybe it was the Christmas holidays, but the major U.S. media largely took a pass on the story. The New York Times didn't show up for 48 hours. National TV news outlets mostly ignored it, despite the appalling images of a community spending Christmas blanketed in a gray, soupy, toxic mess. 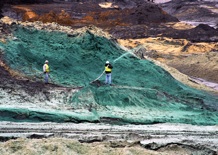 Twitter was an odd exception. The social networking site was abuzz with info from activists, journalists, scientists, and links to reports from regional media treating the story like the major environmental disaster it was.

With a 140-character limit on individual posts, Twitter looks like a poor conduit for in-depth information. But you can fit just about any URL in 140 characters. Twitter also has a simple, unique feature called a hashtag. Type in a key word preceded by the "#" in Twitter's search function, and you'll be taken to every Tweet that includes the phrase— in this case, "#coalash."

Amy Gahran is a Boulder, CO media consultant who specializes in both online and environmental journalism. "I saw a big story that I thought was interesting, and found almost nothing in the national media," she told me. Within a day or two, Gahran had spearheaded a hashtag effort to bring all available info on the spill to a national audience of Twitterers. Other contributors included RoaneViews, a news and info website for the community near the Kingston power plant; the Knoxville News-Sentinel and Nashville Tennessean, two state dailies that have covered the story aggressively; and Jeffrey Levy, an EPA Web Information Officer, volunteered agency maps and stats on the facility. 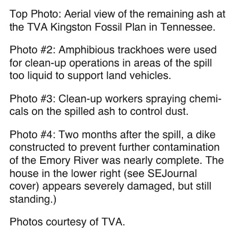 On Feb. 20, Curtis Brainard, editor of Columbia Journalism Review's The Observatory blog on science and environmental reporting, weighed in on the coal ash coverage with a lengthy post that examined the expansion of media attention to include the larger context of the December spill, which occurred at a Tennessee Valley Authority facility — namely, the multifaceted debate over coal's future role in the nation's energy mix.

An excerpt: Despite all the excellent local and regional spot reporting after the Tennessee spill (and one that followed it two weeks later at another TVA waste pond in Alabama), it took the national media a while to realize that the disaster was the perfect hook for a discussion about the future of coal and where technologies like CCS (carbon capture and storage technology) — touted by President Obama — will fit in. Indeed, it was at least two days after the spill before outlets like The New York Times, National Public Radio, and CNN even reported what had happened. Thereafter, those outlets produced some very good reporting. The Times' Shaila Dewan and The Associated Press' Dina Cappiello both had great pieces on the huge volume of unregulated coal ash "piling up" in ponds around the country, and how the Environmental Protection Agency has refused to designate the material as hazardous waste.

But take three pieces — from The New York Times, Time magazine, and The Discovery Channel — that went a step farther, arguing that the waste is proof that "clean coal" is a myth. These reports make a clear distinction between the notion of "clean" as it applies to CCS and to coal ash. Time's Bryan Walsh for instance, wrote that, "The 'clean coal' campaign was always more PR than reality — currently there's no economical way to capture and sequester carbon emissions from coal, and many experts doubt there ever will be. But now the idea of clean coal might be truly dead, buried beneath the 1.1 billion gallons of water mixed with toxic coal ash…." But then, once the point is made that coal is and always will be unclean, the three pieces end with somewhat frustrating, open-ended points about the future. The New York Times, for example, concludes its January 23 editorial (one of the three pieces mentioned here) with the argument that "[C]oal remains an inherently dirty fuel … The sooner the country understands that, the closer it will be to mitigating the damage."

Well, sort of. That's an important first step, but there is still much for that needs to be discussed. First and foremost, we must decide whether or not CCS technology is as worthless as the "clean coal" slogan used to sell it. Unfortunately, reporters were so busy exploring coal ash's relationship to the "clean coal" slogan that few explored coal ash's relationship to new pollution control technologies, which might have produced some very interesting stories.

To get yet another perspective, The Beat asked Bill Kovarik to reflect on the spill coverage. Kovarik is a professor of communication at Radford University in Virginia, the representative of SEJ's academic members on the society's Board of Directors and the editor of Appalachian Voice. The newspaper is published by Appalachian Voices, an environmental organization whose stated mission "is to empower people to defend our region's rich natural and cultural heritage by providing them with tools and strategies for successful grassroots campaigns."

Here is Kovarik's response, written in mid-March. In it, he discusses news coverage of the Tennessee spill and its relationship to discoveries made by activists:

For the first time, the media had sampling results from environmental organizations almost right away. Robert F. Kennedy Jr.'s Riverkeepers, especially, were very active in gathering samples and getting them to university (Appalachian State University) and government toxicology labs.

The results completely contradicted TVA's attempts at public relations. TVA said there was nothing to worry about, and the environmental groups not only said this was a cover-up, but they also proved it within a few days of the disaster.

Typically, the cycle of disaster reporting goes something like this: Disaster occurs, media summarizes; government agency tests, media reports, environmental groups react. Within a week, everyone is clamoring to see the agency test results. FOIA requests are filed. Complaints are made. A month goes by, and the test results come out, and even if the results are fairly serious, the controversy ebbs away.

The typical cycle was broken wide open in the TVA disaster. News organizations were in the air taking photos, and environmental groups were in the water taking samples, within hours of the disaster.

We don't know exactly what TVA was doing wrong — we think they were taking samples from the wrong side of the river — but that question will be answered by a federal investigation. But there is a great lesson here. Citizen science works, and it serves the public interest in ways that some government agencies often do not. There have been environmental sampling operations in the past. This used to be called the "bucket brigade" approach

After the TVA disaster, I think we are going to see a lot more direct sampling, both by environmental groups and the news media. I'm hoping SEJ can do more to train journalists to take samples, to keep a chain of custody, and to bring samples to appropriate toxicology labs.

The other main point I would make is that TVA tried very hard, and is still trying very hard, to manage the news media and keep environmental activists away from the disaster victims and the site itself. When Riverkeepers' Donna Lisenby tried to take the first set of samples, the TVA "police" told her that she was trespassing on the river and gave her a ticket, and told her she'd be arrested if she came back. (She did and she wasn't arrested, but that's another story). TVA has arrested and harassed environmental activists in ways that we haven't seen in decades.

On the editorial page at my newspaper, Appalachian Voice (a publication of Appalachian Voices), we called for the resignation of TVA's CEO and the entire board of directors, not only because their gross negligence before the fact, but also because of its obtuse inability to serve the public interest long after the fact. We are still getting reports of, and seeing videos of, environmental organizers being harassed and getting arrested months after the disaster. It's absolutely appalling.

These citizen environmental volunteers ought to be a resource for the government. We ought to encourage them, for Pete's sake. Instead TVA is treating them as if they were the problem. Many people are angry about this, and we expect any day to hear of heads rolling at TVA headquarters.

Bill Dawson is assistant editor of the SEJournal.