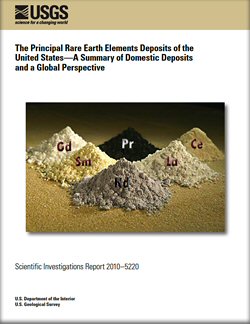 As such, they play a role in the national security of the US and many other countries. But rare earths — which are, unlike their name, fairly common, but often unavailable in easily exploited deposits — are distributed unevenly around the globe, and China has been grabbing headlines lately as its output, which constitutes 96% of the current global market, is highlighted. Such dominance can allow it to substantially manipulate global markets by controlling the amount of rare earths it sells, and setting prices.

To find out where the US stands with rare earths resources, the US Geological Survey made the first-ever nationwide assessment of the country's known deposits. They found that there may be about 13 million metric tons available. The nation annually consumes about 10,000 metric tons of substances such as cerium, erbium, gadolinium, lanthanum, lutetium, and yttrium (whereas the world annually consumes about 116,000 metric tons).

The report provides substantial detail for each of the known sites in 14 states and each rare earth material, and perspective on the global situation.

The biggest US deposits are in California, Alaska, and Wyoming, and the greatest number of sites is in New Mexico. Other states with sites include Colorado, Florida, Georgia, Idaho, Illinois, Missouri, Nebraska, New York, North Carolina, and South Carolina. Some of the site locations are merely described in pretty good detail, while others are mapped in one way or another.

These sites generally pose the usual array of environmental challenges associated with mining and refining, though the specifics will vary with each setting and rare earth element. Some of these sites have been mined before, then shut down, so it'll pay to investigate why that happened, and what may have changed if a site has recently reopened, or may do so. Some have had little or no mining, so this new report may bring a flurry of interest to those areas.

At the global scale, the report says China has 36% of the world's known deposits, followed by the Commonwealth of Independent States (Russia and many former SovietRepublics) with 19%, the US (13%), Australia (5%), and India (3%).

Another angle to look into is whether effective recycling of electronic waste can offer a substantial portion of the rare earths needed.