"Heart of a Lion: A Lone Cat’s Walk Across America" 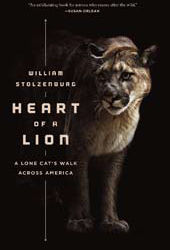 "Heart of a Lion: A Lone Cat’s Walk Across America"

A young male mountain lion left its hostile home in South Dakota’s Black Hills seeking love in all the wrong places before succumbing to death by auto on a scenic highway passing through the Connecticut suburbs.

During its two-year quest to find a mate, the cougar left a trail through the plains, cities, backyards and forests of the upper Midwest and the Northeast, giving rise to rumors and hysteria.

Uncollared, so without a known identity, he left evidence along the way that scientists gathered with incredulousness and zeal.

Was this lone cat an escapee? Did his carcass validate conspiracy theories about the secret mission of various agencies to release this charismatic predator to help manage unwieldy deer herds?

Leave it to author William Stolzenburg to give us the sordid details surrounding a terribly misunderstood animal.

Reaching back in time, the author traces the biological and cultural roots of fear surrounding lions to today’s institutionalized efforts to eradicate this savvy, and wrongfully vilified, animal. In doing so, Stolzenburg creates a portrait of an animal we ought to revere — with caution.

Despite inflammatory legends of a ruthless killer who wantonly gorges on the flesh of critters we hold dear, the lion emerges as a solitary wanderer capable of extraordinary prowess but who prefers to steer clear of our kind.

Myths abound about the wild cat, primarily spread by ranchers who make false claims about predation on livestock, hunters who erroneously blame cougars for the decline in prey species and officials who amplify public fear to justify and sanction ongoing slaughter of this magnificent animal.

This book is not for the tender-hearted. Not only does the animal meet a horrible end, Stolzenburg is unflinching in his exposure of segments of the population that have essentially declared war on an animal for no good reason.

As a counterweight, the author tracks down wildlife biologists who readily supply facts that turn popular misinformation inside out, giving this intelligent survivor overdue kudos.

Written with an enlightening narrative, this book is an important addition to the growing body of evidence pointing to a need for increased protection for predators.

Eliza Murphy is an SEJ member and Oregon-based freelancer.