"Streetfight: Handbook for an Urban Revolution" 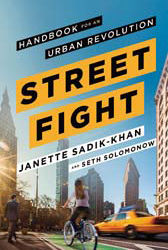 "Streetfight: Handbook for an Urban Revolution"

The genesis of this book dates back to1989 when David Dinkins was elected mayor of New York City.

Janette Sadik-Khan was a young lawyer who had joined Dinkins’ campaign to work on social justice issues. She called herfmother — a City Hall reporter for the New York Post — and asked what agency she should work in to make a difference.

Sadik-Khan’s mother answered, “If you want to touch people’s lives every day, you have two choices: Sanitation or transportation.”

One central goal was introducing new transportation strategies, such as rapid bus networks and bike lanes, that would make city streets safer and more accessible for all New Yorkers, not just those in cars.

Many cities share the problem that confronted New York: a car-focused infrastructure that was congested, inefficient and dangerous.

“Streetfight” (coauthored by Seth Solomonow, Sadik-Khan’s chief media strategist in the Bloomberg administration) asserts that cities can become denser and more livable at the same time, if they redesign their streets to make them function better.

Sadik-Khan describes initiatives that her agency took in New York, such as narrowing street lanes, creating 300 miles of bike lanes, introducing a rapid bus system and widening sidewalks in ways that organized traffic more effectively and reduced exposure for pedestrians.

Before-and-after photos of streets, avenues and intersections show how these steps made spaces more attractive.

And Sadik-Khan cites data to show that most of these changes improved traffic flow, even when cars gave up some of their space on the street. Anyone who has walked or biked in New York in the past four or five years has probably seen some of the results, which include remakes of Times and Herald Squares.

Many of these projects were relatively quick and cheap, unlike typical urban mega-projects that take years and cost billions of dollars.

“Planners can reorder a street without destroying a single building, double-decking a street or building a streetcar, light rail system or highway interchange,” Sadik-Khan argues.

As examples she shows how her agency redesigned plazas in Brooklyn and Manhattan using mainly paint (to delineate where cars could and could not go), planters and outdoor furniture.

Not all of her initiatives succeeded. The Bloomberg administration proposed a congestion pricing system that would have charged people for driving into downtown Manhattan during business hours, but the state legislature (which was required to approve revenue collection programs in New York City) refused to take the plan up.

Some neighborhoods initially resisted New York’s now-popular bike sharing program, arguing that bike racks would be eyesores and block sidewalks. Even bike lanes generated backlashes in some areas, although the administration ultimately prevailed.

Many other cities have faced similar debates, as Sadik-Khan points out. In her view, bikes are not the problem — they simply spotlight the need for better streets.

“Road rage directed at bike riders obscures the underlying design flaws of streets that bring riders, walkers and drivers into conflict in the first place,” she asserts. “Safe, inclusive street designs have the power to settle these arguments before they escalate into conflict and danger.”

Beyond New York, “Streetfight” describes innovative transportation strategies in cities around the world.

Sadik-Khan also looks back at the great struggle that still frames development choices in New York: the standoff between Robert Moses, who pushed for huge parkways, bridges and expressways, and Jane Jacobs, who fought to protect neighborhoods and street-scale urban life.

Both approaches have strengths and weaknesses, she contends: Moses destroyed neighborhoods and displaced people, but Jacobs’ perspective is often invoked now to justify NIMBYism that can block much-needed fixes. City planning, in her view, needs to fuse Jacobs’ street-level perspective and Moses’ ability to move projects forward in real time.

If you have never thought much about traffic patterns, you may find yourself looking at the streets around you differently after reading “Streetfight.”

Jennifer Weeks, a former SEJ board member, is an environmentand energy editor at The Conversation.