"Satellites in the High Country: Searching for the Wild in the Age of Man" 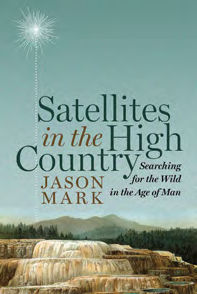 "Satellites in the High Country: Searching for the Wild in the Age of Man"

At a time when it can be argued that no place on Earth has not been somehow altered by humans, “Satellites in the High Country: Searching for the Wild in the Age of Man” asks a critical question: Is there any place that can still be called wild? And why would that matter?

When industrial-scale development has left virtually no part of the world untouched — either by physically altering the landscape or changing the world’s chemistry (think the impact of current atmospheric CO2 levels), is there anything left that truly qualifies as wilderness?

Add to that the telecommunications networks with which we have blanketed the globe with our virtually omnipresent digital devices, and is there any place where a person can still be alone in ‘nature’?

Given all of this, not to mention the plethora of current social and political issues plaguing the planet, as Jason Mark — longtime editor of Earth Island Journal and now Sierra Magazine editor-in-chief — asks quite simply in the book’s prologue, “What would twenty-first century wilderness look like?”

To begin to answer these and their many follow up questions, Mark takes us with him into the backcountry, trekking solo into Arizona’s Sonoran desert, with friends — including backpacking neophytes — in Yosemite’s high country, exploring the dense forests of the Olympic peninsula, on a river trip on Alaska’s north slope, trackingwolves in New Mexico’s Gila Wilderness, visiting Lakota territory in the Dakota badlands and on a teen boys’ Outward Bound course in the mountains of Colorado.

The backdrop to these expeditions is the dilemma we now face in defining what is natural and what can be considered wild on what Mark calls our “post-pristine planet.”

Now that climate change, chemical pollutants that turn up in wildlife from pole to pole and oceans filled with durable plastic trash have left their mark everywhere, how do we make sense of the boundaries traditionally drawn to protect wild places?

Mark makes it clear from the outset that he stands firmly on the side that believes wild places and the ability to experience these landscapes outside human influence is more important than ever.

Places left undominated by humans are essential, Mark says, both for what they can offer us intellectually, physically and spiritually and for their value as biological and ecological refugia.

“I believe we are about to discover that the wild can be like a multi-tool in our twenty-first century survival kit,” writes Mark. “Forget untouched,” he says. “What matters now is whether a place is uncontrolled.”

To help us understand why these questions continue to play such a crucial role in American culture and politics, Mark explores key landmarks in this history. He reminds us convincingly — and without verging on the pedantic — why the writings of Henry David Thoreau, John Muir, Frederick Jackson Turner, Roderick Nash, Aldo Leopold, Theodore Roosevelt and William O. Douglas still deserve our attention as we ponder the concept of wilderness in this age of the Anthropocene.

While this historical territory is far from untrodden, it’s well worth revisiting as Mark presents it in the context of phenomena like “Google Treks,” wolf packs sporting GPS collars and imbedded microchips, people paying big bucks for workshops that teach them to live like it’s the Stone Age while communications satellites cruise overhead.

“We need to defend the wild,” Mark writes, “because in an otherwise programmed and micro-managed society, it remains one of the last bastions of unpredictability.”

Mark offers numerous cogent and gracefully articulated arguments for why wilderness — landscapes and wildlife that we don’t control — and whatever it was that Thoreau meant by wildness may indeed be more important than ever.

And for those like me who have spent time in remote landscapes and have a visceral affinity for them (I once had a life-changing backpacking trip in the Utah wildlands and count among my major accomplishments a solo multi-day kayak trip), “Satellites in the High Country” might be just the book to hand to friends and family wondering why you’re heading off with a heavy pack to sleep on the ground where there’s a danger of bears, rather than staying in a nice hotel.

Elizabeth Grossman is a freelance writer and book author based in Portland, Ore., and is a member of SEJ’s board of directors.