"Ask the Beasts: Darwin and the God of Love" 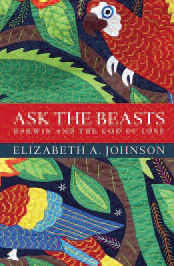 "Ask the Beasts: Darwin and the God of Love"

For those seeking spiritual direction about nature, Elizabeth Johnson offers a path with “Ask the Beasts: Darwin and the God of Love.”

A distinguished theology professor at Fordham University, Johnson embraces the premise of dialogue between science and religion, between Christians of all denominations, between people of faith, and those of none. “Building a bridge between them can have fruitful results, despite unresolved ambiguities that may result,” she writes.

Such a dialogue is not only possible, but necessary for the preservation of our planet and its species, as science and religion have come to a sad pass in contemporary America. Polls, for instance, show substantial proportions of the public “don’t believe” in evolution, the origin and age of the Earth, and other facts.

Johnson goes beyond answering those voices. She establishes a basis for a religious perspective that honors the landscape of all God’s creation, which she calls “the community of creation.” Humans hold a special place in that community, in her view, but have also spiritual responsibility to recognize and love God in all He has created.

For example, Johnson cites the final paragraph of Charles Darwin’s “On the Origin of Species,” which talks about a “a tangled bank” that is “clothed with many plants of many kinds, with birds singing on the bushes, with various insects flitting about, and with worms crawling through the damp earth,” each of which are far different from each other but also highly dependent on each other in a complex way.

It is that kind of “tangled bank” that Johnson said requires care from both believers and non-believers.

Christians traditionally experience conversion, a spiritual awakening, and turn to God. But Johnson calls Christian believers to a different kind of spiritual conversion, a conversion to the Earth. This ecological conversion changes perspective to concern for all the plants, animals and humans of God’s creation.

“Being converted to the Earth and its myriad inhabitants at this time of their distress is a moral imperative that transforms us toward great heartedness, in resonance with the Love who made and empowers it all,” she writes.

Her stated goal is “to discover that love of the natural world is an intrinsic part of faith in God, to practical and critical effect.”

She explores the biblical background on which fundamentalist Christians base their division of religion from science, but which — read with a different perspective — also provides guidelines for moderate and liberal Christians in their search for deeper understanding of the world.

Johnson provides thoughtful biographical material about Darwin, enriching the story of how he thought of his work and how he came to write “On the Origin of Species.”

She describes the natural world in which she sees God in all things.

A difficult read more suited for academia, “Ask the Beasts” gives the reader the history, philosophy and facts to follow Johnson’s arguments. Its fate may be as assigned reading in college theology classes. But it deserves more.

A retired Episcopal priest, who first shared the book with me, told me: “As a Christian, I would want non-religious environmentalists to know that there are a lot of religious people, from all traditions, who want to reach across the ‘faith dividing line’ for the sake of the Earth and its species. Johnson gives Christians a philosophical-theological foundation for doing just that.”

Christine Heinrichs is a California-based author and SEJ .