"The Great Texas Wind Rush: How George Bush, Ann Richards, and a Bunch of Tinkerers Helped the Oil and Gas State Win the Race to Wind Power" 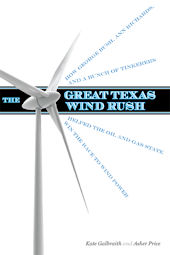 "The Great Texas Wind Rush: How George Bush, Ann Richards, and a Bunch of Tinkerers Helped the Oil and Gas State Win the Race to Wind Power"

By Kate Galbraith and Asher Price
University of Texas Press, $16.72

Gold, oil and land rushes are such oversized legends in Texas that the initial image of a “wind rush” conjures a vision of Pecos Bill striding over the sagebrush prairie, planting rows of giant white whirligigs and leaving streams of glowing electrons in his wake.

Yet sometimes living legends are even more interesting. How in thunder would the politically far-flung panoply of Texas politicians and tycoons such as George W. Bush, Anne Richards and T. Boone Pickens agree on something as ephemeral as grabbing power out of thin air?

Kate Galbraith and Asher Price answer that question with a vividly crafted cross-section of the wind industry through biography, history and literary journalism.

The story starts with the need for water in Texas and the rush of wind engines in the late 19th and early 20th centuries. The wind that turned those engines was said to drive women mad (“always women,” the authors wryly note). The relentless wind made Texas “good enough” for a man or a dog, “but no place for a woman or a cat.”

With hundreds of thousands of wind engines pumping water for railroads and cattle ranches, wind energy was no stranger to the high plains.

So when Texas’ first electric wind farm came along in 1980, it wasn’t seen as radical or even all that unusual.

Galbraith and Price cite the story of Michael Osborne, a visionary influenced by Buckminster Fuller and the solar energy movement of the 1970s, who cobbled together a wind farm in Pampa, Texas.

The wind farm boasted seven 60-foot, 25-kilowatt windmills that needed constant repairs. Since the utility paid only a few pennies per kilowatt hour, Osborne’s wind farm went bankrupt, but the lessons were applied to the new wind farms, with ever-larger turbines and towers. And as the windmill proponents earned their spurs, their persistence began seeping into the diverse political life of Texas.

Around 1992, Texas governor Ann Richards started planning policy and technical initiatives for renewable energy, convinced that most of the previous attempts at energy independence had been little more than “a declaration of war in one place or another.”

Richards’ initiatives fed into the 1999 state electric market deregulation, signed by then-governor GW Bush, which included a 2,000 MW target for wind energy. By 2005, then-governor Rick Perry signed a bill that more than tripled the requirement with a goal of 2015.

The goal was easily met in six years, in part because Pickens, billionaire owner of huge natural gas resources, backed wind power as a hedge against the fluctuating costs of natural gas. The 2008 “Pickens Plan” called for $1 trillion dollars of investment in wind power within 10 years, an amount that seemed preposterous at the time but, with the spread of the great wind rush from Texas outward, now seems merely ambitious.

Along with these oversized Texas figures, a diverse group of profiteers, pioneers and visionaries kept up the grassroots momentum. Since wind power didn’t really compete with anything else, and needed only modest tax incentives, inertia was the problem, not opposition.

“The lesson is one of persistence,” the authors say. “Even in the dark days of the 1980s [the early organizers] never stopped peddling their ideas to anyone who would listen.”

If there is any one fault in the book, it is that the authors somehow missed quoting the late Molly Ivins, who in a 2003 column told ConEd to “eat it” on high nuclear power costs, noting that if wind power had been subsidized at even a fraction of the rate of conventional energy, it would already be the cheapest energy source available.

Today, even though public support for renewable energy is strong, conservative politicians are backing away from the technology at the behest of fossil fuel interests.

And so, as the sun sinks slowly in the west, this rare moment of political unanimity reflected in Galbraith and Price’s "Great Texas Wind Rush" seems, after all, destined to become the stuff of Texas legend.

Bill Kovarik is an SEJ member, a former board member and a professor of communication at Unity College and Radford University, where he teaches history of media, the environment and renewable energy.