"Cloak and Jaguar: Following a Cat from Desert to Courtroom" 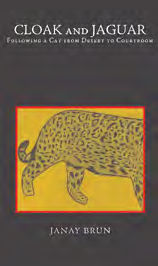 "Cloak and Jaguar: Following a Cat from Desert to Courtroom"

From her first encounter with a jaguar, author Janay Brun’s fate became entwined with the endangered wild cat. Both sustained considerable trauma.

Macho B, one of the first jaguars to slip north of the Mexican border since the last jaguar was shot in 1963, was trapped illegally then killed. After Brun unwittingly played a role in the capture, she got dragged into a tortuous legal battle.

Brun, a self-taught tracker, followed the elusive cat initially as a volunteer for the Jaguar Conservation Team before she was hired to assist the research team. During the project, she was led to believe the goal of the project was to collect data in order to protect the animal. Along the way, any doubts she had about the goal of the so-called “research” were momentarily put to rest by biologists whose objective, although concealed from her, was to trap Macho B.

Brun makes it clear in this heart-wrenching narrative that she took orders from people who were not qualified to handle an animal with special needs. An aging jaguar, Macho B was especially vulnerable to the ill effects of being illegally lured into a trap to be snared, left for hours to fight for his life in the cold and drugged in a haphazard manner.

The first half of the book describes Brun’s loss of innocence as she devotes her life to what she believes is a mission to protect jaguars. Driven by tenderness for animals, she courageously reveals her misgivings while making astute observations of the other team members as well as the natural history of the desert. She reveals the lies and cover-up of the circumstances surrounding Macho B’s torturous snaring that led to misdiagnosed injuries and unnecessary euthanization.

Brun raises issues that point to broader problems with government agencies mandated to protect animals, including leaks of secret information about animal locations that have led to their deaths by hunters.

Against a backdrop of increasing conflict along the Mexican border, gutsy Brun ventures into places trampled by undocumented immigrants, drug smugglers and an out-of-control Border Patrol. She shows the damage to sensitive habitats caused by illegal roadbuilding by ill-qualified Border Patrol agents, and new paths formed by people trying to dodge them.

Readers see the agonizing fallout from betrayal by fellow team members, on up to the state and federal agencies that failed to uphold laws designed to safeguard a federally protected endangered species.

The brutality contained within Brun’s story left this reader raw and troubled. It makes one wonder what other horrific betrayals occur by officials entrusted to protect wildlife from harm without the public ever knowing about it.

Eliza Murphy is an Oregon-based freelance writer and SEJ member.