"Dark Money: The Hidden History of the Billionaires Behind the Rise of the Radical Right" 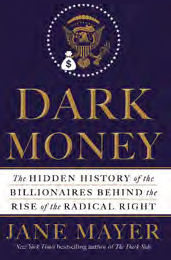 "Dark Money: The Hidden History of the Billionaires Behind the Rise of the Radical Right"

Industrialists Charles and David Koch have operated behind the scenes for decades to influence American politics, promoting conservative arguments for limiting government power and rolling back regulations.

But the scope of their influence, and the methods they use, have only become widely publicized over the past six or seven years.

“Dark Money: The Hidden History of the Billionaires Behind the Rise of the Radical Right,” by New Yorker staff writer Jane Mayer, is a definitive history of Koch Brothers and the libertarian movement that they have helped advance.

SEJ members may know Koch Industries — the second-biggest private company in the United States, outranked only by Cargill — for accusations of environmental impacts from its refineries, pipelines and chemical factories.

Recent examples in the news include the company’s huge pet-coke storage piles in Chicago and its massive investments in Canadian tar sands. There also has been coverage of the Kochs’ lobbying against state renewable energy standards and funding of climate denial groups.

“Dark Money” puts initiatives such as those into context by describing how Charles and David Koch grew up and became leading figures in a campaign starting in the early 1980s to steer American politics hard to the right.

Their father, businessman Fred Koch, was a founding member of the John Birch Society who built oil refineries for both Soviet Russia and Nazi Germany in the 1930s, but later became convinced that Communists had infiltrated the Republican and Democratic parties and were trying to subvert American democracy.

Charles and David were not as paranoid as their father, but grew up believing that government was dangerous and should be prevented from interfering with citizens’ lives and economic decisions.

Charles and David were raised in an atmosphere of intense rivalry with each other and with their two brothers, Frederick and Bill.

By 1983, they had bought out Frederick’s and Bill’s shares in Koch Industries.

David Koch ran for President in 1980 on the Libertarian Party ticket, but received only one percent of the vote. That experience convinced the brothers that the way to advance their views was to work behind the scenes, creating and funding organizations that would promote right wing ideas.

Mayer describes how the Koch Brothers, along with other wealthy hardline conservatives such as Richard Mellon Scaife, John Olin, and Lynde and Harry Bradley, spent millions to create think tanks, scholarships and other programs that would nurture conservative intellectuals.

They sought to shift the direction of policy debates by endowing organizations such as the Heritage Foundation, the Cato Institute, and the “law and economics” movement at universities.

Mayer observes that private foundations of all stripes are “run with little transparency or accountability to either voters or consumers yet publicly subsidized by tax breaks, [and] have grown into 800-billion-pound Goliaths in the public policy realm.”

But she also portrays the Koch Brothers and their allies as relying much more on secrecy than their liberal counterparts, creating front organizations to advance their views and keeping names and agendas from their summit meetings secret.

And Mayer describes incidents in which companies owned by Koch Industries have skirted or broken the law through actions such as falsifying documents, impersonating an FBI agent to intimidate a whistleblower and failing to report test results showing that employees were being exposed to hazardous chemicals on the job.

The Kochs “have a pattern of lawbreaking, political manipulation and obfuscation. I’ve been in Washington since Watergate, and I’ve never seen anything like it,” Center for Public Integrity founder Charles Lewis tells Mayer. “They are the Standard Oil of our time.”

Mayer describes how the Koch brothers have funded relentless conservative campaigns against nearly all of President Obama’s major initiatives, including limits on greenhouse gas emissions and initiatives to boost alternative energy sources.

Although they were unable to get Mitt Romney elected in the2012 presidential election, Mayer uses North Carolina as a case study to show how Koch money helped fund redistricting that produced a Republican legislature, pulling the state hard to the right.

Nationwide, Koch-backed groups funded grassroots organizing that helped Republicans win control of both houses of Congress in the 2014 midterm elections.

Mayer observes that for all the Kochs have achieved, they have yet to elect a president who shares their views.

So far, however, they have not endorsed a candidate (according to press reports, they despise Trump for his positions on issues including trade, taxes and health care).

But Mayer’s book makes it clear that whoever wins this year’s presidential election should be ready to contend with the Kochs on Inauguration Day.

Jennifer Weeks is a Massachusetts-based freelancer and a former SEJ board member.