"From Green to Mean: The GOP’s Downward Environmental Spiral" 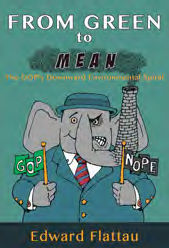 "From Green to Mean: The GOP’s Downward Environmental Spiral"

By Edward Flattau
The Way Things Are Publications, $16.95

Edward Flattau, who has been writing a nationally syndicated environmental column since 1972, offers a critical look at how the Republican Party that stood for conservation under former President Teddy Roosevelt has steadily devolved into a party of denial and obstructionism, especially on climate change, regulations to promote clean air and water, and anything that seems to interfere with short-term gains for investors.

This book, Flattau’s fifth, makes valid points about how today’s GOP has far less empathy on environmental issues than the Nixon administration did when it presided over the first Earth Day in 1970 and the landmark environmental laws that followed, as well as creation of agencies such as the U.S. Environmental Protection Agency.

His timeline shows how the party continued to distance itself from the environment during the Reagan Revolution of the 1980s and the administrations of George Bush and his son, George W. Bush, when the idea of protecting public land gave way to short-term quests for oil.

Flattau’s tone is sharp throughout, but especially the second half of the book, which suffers from a little redundancy and almost goes beyond the curmudgeonly rant of a veteran journalist.

Not that Flattau should go soft. He claims over and over the Republican Party is doomed if it doesn’t realize how it’s alienating the country on environmental issues and rebrand itself.

He offers a fair amount of prescriptive advice, probably too much.

But as the controversy surrounding the emergence of Donald Trump’s candidacy shows us, there is unfortunately a lot of support among the populace for climate denial, a well-rooted disdain for government in general and challenges for both parties that likely go well beyond the environment.

Still, this is a highly useful and thought-provoking book, even if some of its conclusions have a cattle-prod effect.

It makes a case for a systematic breakdown in the party’s sense of reasonableness over several decades, pointing out that Republicans have always been more focused on conservation than public health rules but how — over the years — support for almost all environmental programs eroded.

But as markets changed, the science became more sophisticated and lobbyists wielded more power openly and via dark money.

Government itself — especially the federal EPA, once again an easy political target for conservatives who want funding cuts — became scorned by the GOP.

It’s not too late for the Republican Party to redeem itself, Flattau argues; yet he sees little hope for that if it stays on its current path.

Tom Henry is SEJournal book editor, a member of the magazine’s editorial board and a former SEJ board member. He has covered environmental and energy issues at The (Toledo) Blade since 1993.