"Rachel Carson and Her Sisters: Extraordinary Women Who Have Shaped America’s Environment" 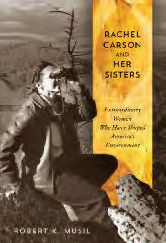 "Rachel Carson and Her Sisters: Extraordinary Women Who Have Shaped America’s Environment"

I’m being a bit facetious – though not totally – when I describe the general tone of “Rachel Carson and Her Sisters,” which is really a hybrid between environmental history and women’s studies.

With a strong emphasis on the former, it’s a valuable addition to the body of knowledge about Rachel Carson and her enormous influence. The only disclaimer – and it’s a fairly minor beef, if not something that was inevitable, given the theme – is that the writing, at times, sounds almost like cheerleading for the women’s movement.

There’s a delicate balance to be struck here, of course, because women consume the book’s theme. But there are occasions in which Musil allows himself to get a bit distracted and tread too much into the rah-rah.

None of this should keep people from reading an otherwise excellent book, though. Credit Musil for coming up with a fresh theme: If Carson is the mother of the modern environmental movement, then who influenced her? And who has been influenced by her since?

It’s an interesting question, one in which Musil sheds light on lesser-known women of the 1800s, such as Susan Fenimore Cooper, Florence Merriam Bailey and Ellen Swallow Richards, whose contributions to science and nature writing could have directly or indirectly helped shape Carson during her formative years.

Musil’s research gives credence to the idea that the modern environmental movement was not something that sprung up from nowhere in response to Carson’s landmark 1962 book, “Silent Spring,” or any of her other writings, for that matter – that it was likely building for decades and hit a crescendo with her. That’s something which other scholars have said – that Carson wasn’t just good, but that she also had the good fortune of being timely when America needed an environmental hero to rally around.

There’s a greater comfort level in Musil’s writing during the second half of the book, when he sheds light on lesser-known women of modern times who have carried on Carson’s work through science, a passion for writing about nature, or both.

Elegant essays are offered on writers such as Terry Tempest Williams, who spoke at SEJ’s annual conference in 1994, and on writer-scientists Sandra Steingraber and Devra Davis, as well as scientist Theo Colborn, another former SEJ speaker.

In February, Musil became president of the Rachel Carson Council, Inc., a group founded in 1965 to promote Carson’s legacy. He also is a senior fellow at the Center for Congressional and Presidential Studies at American University, author of a 2009 book, “Hope for a Heated Planet,” and is former chief executive officer of the Physicians for Social Responsibility.

His book is a loving tribute to Carson, one which both amplifies her influence while also casting a wider net through environmental history, connecting the dots between the 19th and 21st centuries. It also is a valuable contribution to women’s studies, even if it has its moments of sentimentality.