Data Mining Made Easy — A Primer

One sign of the journalism industry’s rapid transformation is the growing expectation, as more magazines and newspapers transition to digital-first publications, for journalists to add data storytelling tools to their arsenal.
If you’re new to data journalism, it may seem intimidating at first to learn data methods. But as a relative beginner in the field myself, I can assure you that with a little patience and diligence, picking up a few data tricks is relatively painless and straightforward.
A tale of two stories
Let’s start this primer with two examples of excellent data stories. Both case studies come by way of the Data Journalism 101 workshop at the Sacramento SEJ conference this year (you can listen to the audio recording here).
The first is InsideClimate News’ Lisa Song’s “Few Oil Pipeline Spills Detected by Much-Touted Technology.” As the first data story Song ever wrote, it had come about largely by accident.
While poking around various databases to practice looking for stories, she downloaded an available database that catalogued oil spills from the Department of Transportation’s Pipeline and Hazardous Materials Safety Administration. In the Excel spreadsheet, she found a column that noted the detection method of the oil spill. Through a quick calculation, she discovered that only 5% of the leaks had been discovered by the highly-touted leak detection sensors installed by the oil companies themselves. Once she verified these results directly with the agency, this became the lede for her story.
It’s a great example of how good data stories don’t need to use fancy computational methods. Song relied only on basic Excel and SQL, a standard language for accessing data within databases. At the Sacramento workshop, she also made an important point that the bulk of her work on the story was still the reporting; the data analysis took a small fraction of the time. 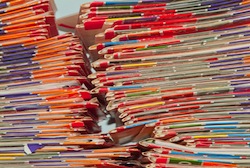 The second example is Seattle Times’ coverage of the Oso landslide, and shows a broader and more complex use of data methods.
In March of 2014, a massive mudslide decimated a neighborhood situated directly in its path, killing 43 people. At the time, Stanford journalism professor Cheryl Phillips — who presented the story series at the workshop — was the data innovation editor at the paper, and her team worked to investigate the destruction.
Prior to the Oso disaster, the team’s work with the University of Washington had uncovered a connection between the region’s logging practices and high frequency of landslides. By overlaying all of the region’s logging permits on a map of all of the slopes’ steepness and stability conditions, they had proved that the state had granted all permits without regard to safety protocols. Using this knowledge, they re-applied the same analysis and mapping techniques to investigate the permitting processes that preceded Oso. They concluded that the neighborhood should have never been built and the disaster had once again been a result of state negligence.
Alongside the narrative reporting of the incident, Phillips’ team created an interactive map of the victims that showed their faces and bios at the locations of their deaths, to further drive home the tragedy of government inaction.
This example demonstrates the ways in which data methods can be supplementary throughout all the stages of reporting — from uncovering the lede to presenting the story.
With these two case studies in mind, we can now cover some of the tools and resources for data reporting, organized under the four steps of data storytelling.
Step 1: Data Collection
Data Sources: The first step to writing any data story is finding and compiling the data itself. If you’re lucky, there’s a readily available database already compiled in your topic of interest. Below are a smattering of interesting data sources that I’ve found over time:
Web Scrapers: If, instead, you need to compile the data yourself, it’ll be good to familiarize yourself with one or two web scraping tools. Web scrapers allow you to automate the extraction of data from a website. An example of this could be downloading all of the pdf documents spread out across dozens of pages in a website. Although you could perform the task manually, you can save yourself a good chunk of time by automating it.
PDF Processing Tools: And finally, if you’re so unfortunate as to have the data you need locked up in pdfs, there are also pdf processing tools.
Step 2: Data Cleansing
Often times, the data you collect will have imperfections. Whether they are duplicate entries, misspellings or formatting issues, they will affect your downstream analyses if they aren’t smoothed or weeded out first.
As a cautionary note, sometimes the issues within a dataset are not actually resolvable or worth the time to tackle. Quartz has an excellent guide for the most common pitfalls to avoid when confronted with poor data quality. Additional reading: “The Quartz guide to bad data” from Quartz
Step 3: Data Exploration & Analysis
OK, your data is squeaky clean, and it’s time to figure out what’s actually in your dataset. During the SEJ’s Sacramento workshop, Phillips mentioned that she often begins her analysis by visualizing her data to understand its patterns and trends. In one project she recounted how, by mapping out a spike in methadone overdose fatalities, her team discovered its correlation to low-income communities, effectively changing the lede of their story.
Depending on the nature of your dataset, exploration and analysis can take on many forms.
For quantitative data:
For qualitative data:
For geographical data:
Step 4: Data Storytelling
Finally, you’re ready to tell your story. Perhaps, like Song, the analysis has given you a lede to pursue and the rest of your work will involve traditional reporting techniques; or like Phillips, the story begs to be told through visualization. If the latter, the visualizations you create during your exploration could very well be the same visualizations to present to your readers. By the way, both Song and Phillips mentioned the important role designers play during this process.
Since the tools for visual storytelling are largely the same as the tools above, here is a list of inspiring examples instead:
And for good measure, here’s a great article about the number one pitfall to avoid:
Additional resources
To continue your data journalism education, below are more excellent resources. First, the free:
And the not-so-free:
Special thanks goes to Lisa Song, Cheryl Phillips, the Stanford Computational Journalism Lab, MIT Professor Rahul Bhargava’s Data Storytelling Studio and NICAR — the unknowing sources that proffered me with the majority of this material.
Karen Hao received her B.S. in mechanical engineering from MIT and worked as an application engineer at a startup before transitioning into journalism. She is currently an intern at SIERRA magazine in San Francisco and will begin a fellowship with Mother Jones in December.