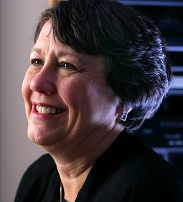 A few days before the SEJ conference in Roanoke, I flew into Pittsburgh to hook up with cousins in Steubenville, Ohio, for a trip downriver. For two days, we followed the coal trail, passing coalfired power plants, coal barges, more coal plants and places Sarah Palin had just left, after revving up crowds with cries of "Mine, Baby, Mine!"

In the dark, on my handheld Treo, I read up on the environmental issues posed by DuPont's Teflon plant in Parkersburg, West Virginia, as we searched for the elusive plant. Several friends, including conference co-chair Ken Ward, said the Teflon plant was a 'don't miss' sight. When we finally found it, its endless lights looked like a small city.

We spent that night in Charleston, West Virginia, within sight of the state capitol, where coal interests have held sway for a century. The next day, we drove back roads, expecting to see missing mountaintops everywhere, but they were all hidden behind gorgeous hills covered with brilliant fall foliage – just like the clear-cuts in Oregon are hidden by impressive stands of timber that peter out a few dozen feet back from the road.

All this set me up perfectly for the conference itself: the rural reporting day on Wednesday that focused on coal and climate change, the Thursday field trip to see mountain-top removal, the Friday morning coal plenary, the keynote by IPCC chair R. K. Pachauri, and Sunday's moving literary conversations with three of coal country's finest writers: Wendell Berry, Denise Giardina and Ann Pancake.

With climate change big-footing the environment story, the next chapter will be about the next dominant energy source. For the first time in memory, environmental issues became part of the presidential debate this year — not just a position paper that quietly moldered on a shelf or on a candidate's website, but real questions asked during televised debates. And the questions were about energy. About coal.

Not so. It's just that Obama thinks his goal of clean coal by capturing and sequestering, or storing carbon dioxide, may be impossible to achieve.

"If somebody wants to build a coal-powered plant, they can," Obama said in a January interview with the San Francisco Chronicle, which Sarah Palin resuscitated two days before the election. "It's just that it will bankrupt them because they're going to be charged a huge sum for all that greenhouse gas that's being emitted."

Obama's stand on nuclear power is similar – he's all for it, with a couple of small caveats like finding a safe place to store the waste and making sure plants are safe from terrorists.

"I don't think there's anything that we inevitably dislike about nuclear power. We just dislike the fact that it might blow up and radiate us and kill us," Obama told the Keene (N.H.) Sentinel editorial board in 2007.

Oh, and although he lost West Virginia, Obama won other mining states – Pennsylvania, Virginia and Nevada. It helped enormously that Obama's opponent was John McCain, the only Republican candidate this election who has a track record of trying to do something about climate change. In fact, last year Obama signed on as a co-sponsor of the McCain-Lieberman Climate Stewardship Act.

Like earlier versions, it failed to pass Congress. But that general agreement on the big picture of climate change allowed the election-year debate to center on the details.

Obama sees new energy creation as the way out of the nation's economic crisis, by reviving a new wave of manufacturing, and new jobs. He told Time magazine that it will be his "No. 1 priority." "There is no better potential driver that pervades all aspects of our economy than a new energy economy," Obama said in October.

He's promised to implement cap and trade, back energy efficiency and conservation and invest $150 billion over the next decade in renewable energy sources like solar, wind, geothermal and bio-fuels, which he pledges will make up 25% of the nation's energy mix by 2025.

What does this mean for SEJ? It means that our members are the most credible reporters around on the biggest political and economic story of the next four years.

What can you do about it? For starters, let your editors know. Don't hide your light under a bushel. Make sure you don't get aced out of coverage plans by the political desk. At the very least, this is a story worth double-teaming.

And if you don't have an editor because you're a freelancer, take heart in knowing that you've got immediate credibility with publications hoping to cover the energy story.

If you've been specializing in sprawl or salmon or Superfund policy, it's time to tackle the energy beat.

SEJ can help. Before Roanoke, I knew next to nothing about coal. Now, I know a little, and more important, I have a feel for the people of coal country – the miners, the coal company, the politicians, and the people who live in the hollows.

If you've never checked it out before, please go to sej.org and spend some time with SEJ's Climate Change Guide. Joe Davis and Bill Dawson have created a compendium of information, including a new regional source Rolodex that will help you localize the climate and energy story.

Read the SEJournal. Apply to a climate coverage workshop – SEJ tracks them all. Tap the expertise of other SEJ-ers by using the sej-talk listserv. And look for the connection between where you live, and where you get your energy.

How many times in Roanoke did we hear "whenever you flip a light switch, you're burning coal that came from Appalachia?" I assumed my electricity back home in Portland comes from hydro-power – cleaner than coal, but problematic for the salmon in the Columbia and Snake Rivers. But wouldn't you know my power company, Portland General Electric, gets some coal from a mountaintop removal site in Kirk, W.Va., according to ilovemountains.org, which features a coal connector tool by zip code.

In time, perhaps SEJ will come to stand for the "Society of Energy Journalists."