"How Risky Is It, Really? Why Our Fears Don’t Always Match the Facts" 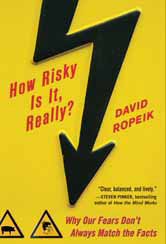 How Risky Is It, Really? Why Our Fears Don’t Always Match the Facts

Asking an SEJ member whether modern life is risky is like asking if the Pope is Catholic — we take it as a given. Consider a recent set of headlines from SEJ's daily news roundup: out of ten stories, seven covered threats to the environment and human health (including climate change, pollution from oil and gas drilling, and weak enforcement of environmental laws), compared to three on solutions (rescued sea turtles, advanced battery research, and a way to help sheep and cows burp less methane into the atmosphere).

It's impossible to understand how modern society is affecting Earth's environment without considering risk. The problem, according to consultant and former journalist (and SEJ member) David Ropeik, is that Americans don't always judge correctly which risks matter most. At times they worry too much about small risks and not enough about big ones, a phenomenon he calls the "perception gap." Although the news media is not his main focus, Ropeik contends that journalists make the problem worse by playing up negative, frightening, or controversial issues and not putting risks into perspective.

How Risky Is It, Really? starts by explaining the biology of risk perception — which, Ropeik emphasizes, is a mix of emotion and reason. When our brains perceive a threat, they act first (triggering a "fight or flight or freeze response") and ask questions second. That's a protective response, especially when we face primal threats like a hissing snake or a clubwielding enemy.

Modern risks like tainted food or toxic waste are more complicated, so people have to gather facts and evaluate the problem. Since our time and attention spans are limited, we use mental short cuts to make judgments. For example, we focus on clusters of suspicious results (even if they could result from random chance). And we worry less about situations in which we feel in control than about risks that we believe are forced upon us. Cultural and political values also shape our decisions. If you believe that the government's role is to protect citizens from harm, you're likely to support banning a controversial substance like Bisphenol A from consumer products. An individualist who reveres personal responsibility and freedom of choice will see the nanny state at work.

Ropeik's point is that our response to risk is complicated, and it's pointless to tell citizens to be more rational (or regulators to be more humane). But he does want readers to think about risks in a more balanced way. As he notes, hundreds of excess deaths from auto accidents occurred after the 9/11 attacks because Americans were afraid to fly and took car trips instead, even though driving was statistically more dangerous. Others may worry more about food irradiation than about controlling their own weight, even in the face of warnings about obesity and health risks. "We have to fear both too much fear and too little. Both can be dangerous," Ropeik writes.

Discussing how the news media covers risk, Ropeik offers some specific pointers for journalists. News stories should report both relative risk (the statistical danger of X compared to Y) and absolute risk (the numerical odds of X occurring). Reading that the danger of X has doubled sounds dramatic on its own, but less so when the story goes on to say that 1 in 10 million people used to get X, but now 2 in 10 million people get it.

Risk reporting should also discuss both exposure levels and hazards. Who in a group or community is exposed to the risk at issue, by what pathways, over what period of time? What is the evidence showing or suggesting that exposure, at what levels, may be harmful? Ropeik admits that in the past he reported stories about hazardous waste sites "pointing an accusatory finger at pollution emitted from smokestacks or drainage pipes without offering my viewers any information on whether the tiny amounts they were being exposed to were hazardous."

Getting risks right matters for society, too: it affects how much money we spend on treating diseases, developing new technologies, and regulating products and processes. In Ropeik's view, Americans worry too much about risks from nuclear power and not enough about health and environmental impacts from fossil fuel. And we don't worry enough about climate change, partly because many citizens still perceive it as an abstract issue that doesn't bear directly on their lives.

There's no quick fix for these tendencies. Just-the-facts reporting ignores the emotional component of risk perception, but playing to people's feelings on complex technical issues isn't the answer either — especially when the choice is between two risks. This book's core theme is that decisions (and, implicitly, reporting) about risk should be informed by both facts and values. Ropeik sums it up by quoting French philosopher Blaise Pascal: "We know the truth, not only by the reason, but by the heart."