Climate Documentarian Motivated by the Heart 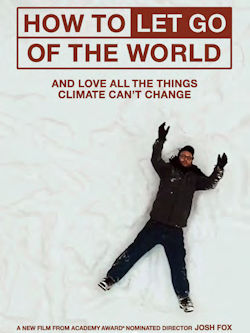 “Gasland” filmmaker Josh Fox is back with what may be the longest film title in recent documentary history — “How to Let Go of the World (and Love All the Things Climate Can’t Change).”

Fox had already scored big in 2010 with the anti-fracking documentary, “Gasland,” which premiered at that year’s Sundance Film Festival. It won a special jury prize there, then went on to gain an Emmy and an Academy Award nomination.

His new 125-minute documentary, which was screened at the 2016 Sundance Festival in January, poses the question of how we come to terms with the reality that our atmosphere is being damaged beyond the tipping point.

Fox came to the climate topic after what he describes as much soul searching. He had toured more than 350 cities worldwide with “Gasland” in support of what became a global anti-fracking movement.

But he decided that the answers for how to respond to the degradation of our environment couldn’t be found in his own fracking-threatened backyard. So with the new documentary in mind, he traveled the world to connect with communities already facing grave effects from climate change.

The resulting film is a complicated mix of tragedy and inspiration about the various ways climate change is affecting value systems. It’s a sobering portrait that takes stock of what makes humans into survivors, and what makes our societies so creative and resilient.

‘Something to believe in’

Fox’s personal approach to filmmaking is apparent in the new project, which casts so-called “climate warriors”. He says of one scene where South Pacific Islanders, Australian environmentalists and others piled into canoes, kayaks and anything that floated to confront a huge coal cargo ship, “This is how you stop a wave from crashing into your home. This is how you do it — grassroots movements.”

With this new doc, Fox says, “I needed to know there was something to believe in.”

For instance, power system modeler and energy policy specialist Ella Chou, interviewed in the film at the Great Wall of China, imbues him with“moral imagination” by thinking outside of the box and by pushing forward the technology she insists science already has in order to make the changes needed.

To Fox, great journalism is about being “35 times more certain of the facts.” But it’s also motivated by the heart. So “How to Let Go” is a kind of journal of the internal response to the problem.

So much about climate change has been science based, Fox felt, but for individuals it’s also created an emotional rollercoaster.

“As a journalist I can’t ignore that the science says two degrees is too high. And we’re there — I can’t hold that information back,” he told me. “[But] I’m a playwright, I believe in catharsis.”

Fox believes we need to get through the emotion and come out the other side, prepare for what’s coming and fight to stem the tide as part of a community.

“As an individual you can do almost nothing,” he added. “You have to work with a community.”

For the filmmaker, the documentary is only the first step to gaining attention for an issue. The journalist-turned-activist now wants a global movement, where media responds to his work and people ask what needs to be done.

In the end, he sees his films as “labors of love and passion.… This is social investing, not making a living,” he tells a Sundance audience. “The world is lost and saved every day. Show up and give time.”

“How to Let Go” will air this spring on HBO. Go to Sundance.org for more information.

JoAnn Valenti is a member of the SEJournal editorial advisory board and a 25-year veteran of the Sundance festival.