"The Boom: How Fracking Ignited the American Energy Revolution and Changed the World" 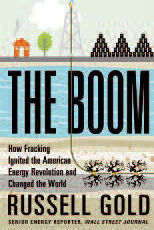 "The Boom: How Fracking Ignited the American Energy Revolution and Changed the World"

The dramatic spread of hydraulic fracturing (aka fracking) for oil and natural gas over the past decade has transformed U.S. energy prospects. It also has sparked widespread debate over fracking’s environmental impacts at all levels, from backyards to regional water supplies to Earth’s atmosphere.

But he also explores local health and environmental impacts, and the prospect that mining and burning abundant natural gas could worsen climate change.

“The Boom” provides a useful history of drilling for energy in the United States that shows how techniques and regulations have improved since operators first started enclosing wells in California in the early 1900s.

Gold calls the moment when basic fracking technology was patented in 1948 a turning point in energy production. “The age of the wildcatter was drawing to a close. The age of the petroleum engineer had begun,” he writes. “From this point on, the industry would be defined by men convinced they had the tools and science to bend rocks to their will.”

Through the mid-1990s oil companies used thick gels to get more production out of wells drilled in permeable rocks such as sandstone. Then in 1998, Texas-based Mitchell Energy pioneered a new method: “slick-water” fracking, using four or five times the volume of fluid (mostly water) as gel fracks.

Oil and natural gas companies quickly started using the new approach across the Barnett Shale in Texas. In 2002, they started combining the water technique with horizontal drilling through shale formations. That approach yielded even higher-producing wells.

But as Gold notes, few engineers could explain why the process worked so well. At a shale gas conference in 2008 where hundreds of engineers took an informal survey, 80 percent disagreed with the statement “I am confident that I understand reservoir drainage” (how gas moves out of shale formations through fractures and up into wells).

Gold visits many regions where fracking is taking place, including Sullivan County, Pa., where his parents own a farm.

He finds many landowners who initially welcomed the income from drilling leases but then were overwhelmed by the traffic, noise and property damage that follows when companies start fracking dozens of wells around them.

Gold described how Pennsylvania regulators scrambled to keep up with impacts from Marcellus Shale development, including millions of gallons of polluted wastewater from fracking operations and aquifers contaminated by sloppy drilling.

Gold also explores the growth of opposition. He recounts how fracking divided environmental groups, with some (notably the Sierra Club under then-president Carl Pope) endorsing natural gas as a bridge fuel that would help speed the shutdown of old, dirty coal-fired power plants.

But he also quotes advocates such as Bill McKibben and Pope’s successor at the Sierra Club, Michael Brune, who call natural gas a half-measure that will not reduce U.S. greenhouse gas emissions quickly enough to avoid disastrous climate change impacts.

Gold sees natural gas as the best option for the next several decades, until renewables can be scaled up further and battery storage improves.

However, he argues, fracking has to improve. The industry needs better leak-detection tools, more data on public health impacts and more effective methods for reducing methane leakage (methane is a potent greenhouse gas).

“The industry has wanted to move extremely quickly to drill the wells — to beat the ticking clock of lease obligations, to meet or exceed Wall Street’s earnings forecasts and to begin generating a return on the money it invested in wells,” Gold writes. “It’s time to slow down.”

“The Boom” makes a persuasive case that fracking isn’t going away soon, and that understanding how it works is the first step toward reducing its harmful impacts.

Jennifer Weeks is a Massachusetts freelance journalist and former SEJ board member.