"The Lost World of the Old Ones: Discoveries in the Ancient Southwest" 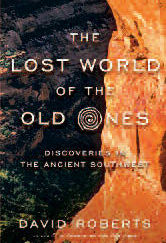 "The Lost World of the Old Ones: Discoveries in the Ancient Southwest"

On a warm May morning in 2005, three explorers traversing a dusty, trackless canyon on a ranch in southern Utah caught sight of a squat stone building, high on the wall of a thousand-foot sandstone cliff, tucked under an overhanging lip of sheer rock.

Hours later, the three companions — two seasoned climbers and an archaeologist — rappelled out over the cliff face, trying to get closer to the structure. What they saw was an ancient double granary, large enough to store a ton and a half of dried corn, but with no feasible way to access it.

If modern explorers couldn’t reach the site, how had the builders ever hauled stone to make the structure, much less filled and emptied the granary of its harvested corn?

Nowhere else in the United States are the artifacts of ancient cultures so abundant, so well preserved, and so deeply explored as those of the Four Corners region of the American Southwest.

Yet as freelance National Geographic travel writer, mountaineer, explorer and author David Roberts attests in his new book, “The Lost World of the Old Ones,” fundamental enigmas about these early indigenous cliff dwellers still remain.

Chief among them is the still-unsolved puzzle of why the ancestral Puebloans and their northern and southern neighbors, the Fremont and the Mogollon, flourished for centuries, building small cities into the often inaccessible cliffs, decorating remote canyon walls with animals, birds and other symbols — only to apparently abandon their homes between the 12th and 14th centuries.

Did a changing climate bring devastating drought, famine and warfare? Or were there other factors at work? Roberts lays out a page turner about cliff-dwelling cultures of the American Southwest.

Environmental journalists will appreciate Robert’s deep dive into the realization that past changes in climate may have shifted early Southwestern populations, but didn’t push them out or destroy them.

They’ll also get a close look at how modern challenges of rugged terrain, harsh climate and government bureaucracy are failing to keep these ancient living sites safe from both well-meaning visitors and antiquities thieves.

Among modern-day characters, you’ll meet retired cowboy Waldo Wilcox, who knows more about the abandoned Fremont settlements on his former Utah ranch than many experts.

You’ll also meet Kalvin Watchman, a Navajo from Canyon de Chelly, who shows Roberts that even modern indigenous Southwesterners are still the ‘genius’ climbers that Roberts assumes the ancient people must have been.

And you’ll get a firsthand introduction to the still hotly debated theories surrounding the Chaco Canyon culture of New Mexico first posed by archaeologist Steve Lekson in his 1999 book “The Chaco Meridian.”

With its central complex of a dozen massive, multi-story pueblos and a huge network of roads radiating as far as 150 miles away to more than a hundred outlier pueblos, archaeologists have long debated whether the Chaco culture might have been an incipient empire.

Roberts’ book isn’t for the archaeologically faint of heart. One of the most controversial practices he promotes would have many archaeologists fuming. His “open museum” principle encourages people stumbling across unexplored sites and undiscovered artifacts to leave them in place, disturb nothing — and tell no one where they are.

Roberts bemoans the loss of public access to many sites of historical significance once they are placed in the hands of state agencies, the National Park Service or tribal groups. With so many sites under inadequate protection, Roberts argues that open access — even for looters —is better than no access at all.

The sheer wealth of ancient Four Corners sites is staggering. Leaving many of these ruins alone and intact gives visitors a real sense of the monumental achievement of these ancient inhabitants — and provides researchers with fresh fields of exploration for generations to come.

Karen Schaefer is an Ohio-based freelance radio journalist and an SEJ member.