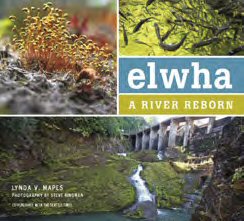 After recognizing the industrial potential of the Elwha River rushing off the Olympic Mountains in Washington State, one dam visionary abandoned his post as managing editor at a local newspaper to harness that river.

A century later, recently freed from a wall of native rock and cement, the river is once again nearly free to run its wild course to the Strait of Juan de Fuca.

Times have changed since “swashbuckling pioneer” Thomas Aldwell controlled the river through questionable means. His enthusiasm was infectious, spreading to his contemporaries who shared his view that the river possessed great potential to supply energy and serve the needs of manufacturing.

Since that era of phenomenal development, dams have become publicly damned as scientists deliver bad news about the cascade of ecological problems caused by these behemoths that stand in the way of natural cycles.

What better species to illustrate the need of a river to flow than the iconic salmon? Although they have a considerable obstacle impeding their ability to reach their traditional spawning grounds on the Elwha River, that has not stopped them from trying. Author and Seattle Times reporter Lynda V. Mapes shines brilliantly when she provides sensory details, especially at moments like watching a biologist handle a captured Chinook, or tyee, the king of salmon.

Here, the page recedes and the fish rises into three dimensions as if jumping up a waterfall, with “silver drops clinging to its massive body…jaws as long as an ear of corn, snaggly teeth…A ripeand feisty hen, she squeezed an egg out of her vent; vivid red and glowing, the egg seemed to contain its own light.”

Mapes got to know this river intimately during the 16 years she has covered this beat for the Seattle Times.

She tagged along with scientists to wade deep into frigid, treacherous water; traipsed through mossy forest populated with salamanders, nettles, sword ferns, elk, water ouzels and Swainson’s thrushes; conducted hours of interviews with tribal members, bureaucrats, engineers, laborers and scientists; pored over documentsand leafed through archives that rustled with the “death rattle of onion skin typing paper” to offer the story of the river in its complexity.

The narrative never gets bogged down. This is a lively account of the end of an era and the liberation of a river that was not universally celebrated. It reads like a good story, with opinion reserved for characters to express; each offers a different slant on this expensive, elaborate project.

Ringman’s photographs do more than enrich the narrative. No detail is too small or grand for him to miss with his lens. He captures the tension inherent in this feat – walls of sediment, the expression on the face of the power station manager as he pulls the switch to off for the final time, a wildlife biologist inside a river otter trap ensuring that the door closes quickly, Klallam tribal members preparing a ceremonial cedar raft for Chinook.

His images, combined with rare historical photographs, heighten the inescapable truth that people are part of a river’s natural history.

Damming the river, although fraught with tragedy and considerable technological glitches and setbacks, was a cakewalk compared to busting the dams. One dam is gone, and the salmon get to swim further upstream. Next year, the remainder of the second dam, farther upriver, will be removed.

Readers will have to wait a few years for the sequel to find out how the river behaves once it regains the freedom we took from it.

Eliza Murphy is a freelance writer and SEJ member who lives in Oregon’s Willamette Valley.