"American Catch: The Fight for Our Local Seafood" 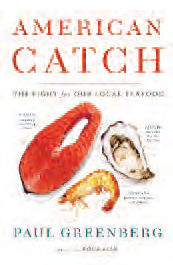 "American Catch: The Fight for Our Local Seafood"

In “American Catch: The Fight for Our Local Seafood,” author Paul Greenberg tries to explain a paradox: The United States has billions of acres of ocean, and fishing is one of our most historic industries, but more than 90 percent of the seafood that Americans eat today is imported.

To see how this happened, Greenberg examines the fate of three historic American fisheries.

His first case, New York oysters, is a story that has played out in many places along the Atlantic coast. Less than a century ago, local oysters were a common food in Manhattan. Today, more than 80 percent of the salt marshes that once lined New York Harbor are gone, and the city’s waterways are still fouled by combined sewer overflows, which make the few oysters left there unsafe to eat.

But the Clean Water Act is helping an East Coast oyster industry slowly rebuild. And flooding during Hurricane Sandy has spurred new interest in recreating oyster beds in the harbor to buffer the city against future storms.

“It is high time for such a development, not only for New York but for every place humans built their settlements on the coast,” Greenberg argues.

Next, Greenberg recounts how industrial-scale fishing converted shrimp from a specialty in the 1950s to a marine version of a commodity crop today.

Louisiana fishermen who catch brown shrimp in the Gulf of Mexico compete with farmed shrimp from Asia, which don’t have the same distinctive flavor but are cheaper. Adding to the pressure, shrimpers now have to travel around the Gulf of Mexico dead zone to find adequate hauls.

Some shrimpers are trying to save the fishery by creating marketing programs that sell Gulf shrimp directly to consumers under local brands, bypassing large-scale bulk wholesalers. But as Louisiana’s marshes deteriorate, destroying shrimp habitat, the fishery’s future remains uncertain.

Greenberg’s third case is what he calls the “last, best chance” to save a healthy wild American fishery: Alaskan sockeye salmon.

The Bristol Bay salmon fishery generates $300 million in profits every year, but is threatened by the proposed Pebble Mine in the bay’s watershed.

If the mine is developed, it would produce billions of tons of acidic wastes that would have to be stored onsite behind an impoundment dam.

Fishermen, environmental advocates and the Bristol Bay Native Corporation argue that the mine poses an unacceptable threat to Bristol Bay.

Greenberg warns that although many U.S. fisheries are recovering from overfishing in the 1970s and '80s, American fishermen are struggling to compete with cheap imported farmed fish. That feeds a larger, vicious cycle: Fish-processing centers lose business and close, so U.S. fishermen sell unprocessed fish to foreign buyers who freeze it and export it.

Developers buy up coastal land, drain wetlands and build vacation homes for people who have no ties to the coast and are happy to eat imported seafood.

Greenberg nimbly explains the conflicting pressures on U.S. fishermen, and paints vivid pictures of the waterfronts he visits in New York, Louisiana and Alaska. He finds some hope in community-supported fisheries and other groups that sell local fish to local buyers, and in “soft” coastal restoration programs that rely on natural elements like oyster reefs and restored wetlands.

“This is, in the end, a fight for all Americans,” he contends. “A struggle for biologically vital coasts, economically viable waterfront communities, and good, healthful food.”