"Poisoned Profits: The Toxic Assault on Our Children" 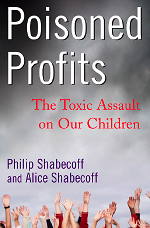 "Poisoned Profits: The Toxic Assault on Our Children"

A clear, accessible account of how regulators failed to protect the public

When is a crime a crime?

Evidence grows daily that our air, water and food are becoming increasingly contaminated with chemicals and that these chemicals are related to a rise in both chronic and acute diseases among children. When someone deliberately puts a contaminant in milk powder, resulting in illness and death, that's clearly a crime. When someone deliberately manufactures a substance for some other purpose, but that substance also causes illness or death, the answer is not as clear.

Poisoned Profits: The Toxic Assault on Our Children, Alice and Philip Shabecoff's new book, casts the issue of chemical manufacture, use and disposal as a crime story, with chapters titled for example, "Indictment," "Evidence" and "Witnesses for the Defense." This strategy, while clever, cannot hide the fact that the book should properly be called a polemic, not a crime story. This sometimes gets in the way of the strong message and most powerful parts of the book.

The Shabecoffs' discussion of the ways in which chemicals differentially affect children and fetuses is clear, detailed and disturbing. Children are not small adults in terms of how much toxic input their bodies can tolerate. Understanding the difference between the effects on children and adults is critical to understanding just how poisonous some substances can be. The book points out how current evaluation methods of toxicity fail to capture this but also how changing analytical technologies are bringing us ever closer to better diagnostic tools.

Poisoned Profits also provides a clear account of how the dismantling of our regulatory framework, begun during the Reagan administration and enthusiastically expanded under George W. Bush, protects chemical manufacturers' shameful activities. Examples range from the evisceration of the EPA, to the practice of putting chemical industry executives in charge of watchdog agencies, to many other changes made to favor industry over public health. The Shabecoffs shine needed light on the sorry state of protection for the public. These practices continue even as I write this review. SEJ's own EJToday cited recent news reports that an FDA report finding the controversial chemical bisphenol A safe was written by the plastics industry and that the White House changed a new EPA lead emissions rule at the last minute to protect polluters.

Perhaps the most cynical aspect of government's failure to protect public health is the court's practice of allowing companies to settle with injured families and communities by blackmailing them. Companies will pay only under the condition that the families promise not to take their cases to the public or even to talk about them at all. Corporations use the claim that they are protecting trade secrets, but the effect is that there is no accretion of knowledge and experience for a concerned public to learn from and on which to act. This of course only serves to protect manufacturers, not citizens.

The Shabecoffs also directly address the issue of our role as consumers of the products that threaten our children. They discuss values at length and are not afraid to pose hard questions about lifestyles and personal economic decisions. Do we want a weed-free lawn, a perfumed car, a spotless carpet so much that we're willing to poison our children? There is no way around the fact that companies make products because we buy them. We buy them because we like them. We are adults and we can exercise our judgment. It is entirely appropriate to challenge our consumption patterns.

But the book fails to distinguish between consumer products that may be dangerous versus substances that are part of the waste stream or are by-products of other processes. For the first category we can seek alternatives. Consumer demand is a powerful incentive for manufacturers of consumer goods. And consumer advocacy might be the best way to combat this kind of contamination. But waste disposal, secondary chemical production and products for which the manufacturing process itself is the problem need to be regulated and controlled differently. Individuals cannot be expected to understand everything about the making of things on which we all depend. Government protection, through good laws and intelligent enforcement, is the only protection we have. And in fact many of the most egregious cases cited by the Shabecoffs are the result of improper industrial waste and byproduct disposal. The latter is, I think, a crime, and the Shabecoffs' indictment does not overstate the truth.

Poisoned Profits suffers from uneven writing. It wobbles between a strident exhortation to action and a sober report on a grave and urgent public health issue. But it calls attention to some of the worst dangers facing our most vulnerable citizens and it is written in a way that is accessible to everyone.

Kathleen Regan is working toward a master's degree in environmental sustainability and food production from the University of Hohenheim in Stuttgart, Germany. A former researcher at Marine Biological Lab at Woods Hole, she wrote a chapter for the 2007 book, Creating a Climate for Change.