"Water Is for Fighting Over...And Other Myths About Water in the West"

"Water Is for Fighting Over...And Other Myths About Water in the West"

The title of fellow SEJ member John Fleck's book, “Water Is for Fighting Over...And Other Myths About Water in the West,” plays off the famous quote many have wrongly attributed to Mark Twain, "Whiskey's for drinkin', water's for fightin' over."

While I'm a big fan of the humorist from Hannibal, Mo., I don't see this so much as a myth-busting book than a solid overview of hotspots in the Western water wars.

If there is a myth-busting element, it's found in Fleck’s optimism that the situation out West — while dire —isn't as disastrous as many people fear because, somehow, scarcity once again has inspired innovation and creativity. 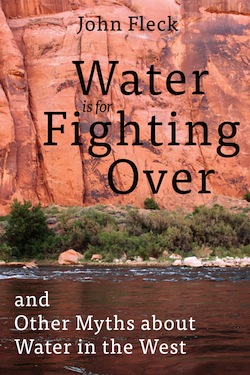 From Fleck's point of view, agriculture and other institutions may be stressed but are not on the verge of collapse. He makes a hopeful case that, while not perfect, perhaps the West is showing the rest of North America how water conservation and interstate cooperation might actually work, rather than falling into the trap of believing his region of the country is doomed.

It's hard to tell how much of this is wishful thinking. But Fleck’s book makes a subtle, yet important distinction about these issues by putting them in the context of risk assessment, a highly important field that journalists often equate more with issues such as nuclear power, pipelines, fracking and oil refining.

Risk assessment gets to the heart of how we can optimize our talents as journalists by becoming more fair, balanced and analytical, brushing off the hype and trying to tell the real story.

Fleck should know whereof he speaks. He’s director of the University of New Mexico’s water resource program, and covered science and the environment for the Albuquerque Journal for 25 years (he’s also author of a children’s book about Western climate, “The Tree Rings’ Tale”).

Like Fleck, I've been covering water conflicts for at least 30 years now, although my focus has been the water-blessed Great Lakes region while his has been on the arid Southwest. My part of North America is seen largely as a neophyte on this very important and deepening global crisis, while his has been the one taking the first steps into uncharted territory, the drought-stricken guinea pig of water-management experiments over shared-but-distressed resources, such as the Colorado River.

For several years now, especially when I attend a major Great Lakes water conference at the University of Toledo each November, I have heard legal scholars in the Great Lakes region say how they look to the West for case studies in how water compacts and other agreements related to that region's history of long shortages play out, wondering what scenarios this region might be able to avoid as shortages here become more acute. There's a lot to be learned from the Western experience and, to Fleck, the fragmentation of news reports may not tell the whole story.

Perhaps it's naive to think everything can be solved through conservation and successful compromise. I didn't get that impression from Fleck's book, though. He writes about some excruciatingly tedious and policy wonk matters affecting states such as Arizona, California, Nevada, Colorado and New Mexico.

Anyone who's covered water-management will tell you the subject can be, shall we say, rather dry sometimes. But the theme that emerges is one of hope, provided public officials in the Great Lakes region sweat the details like they have been out West.

The gold standard for writing on Western water conflicts is the late Marc Reisner's 1993 classic, “Cadillac Desert: The American West and Its Disappearing Water.” But Fleck's book also provides a strong historical overview, a modern 2016 vision and helps explain why the Southwest — through its combination of characters and determination — is holding its own, despite having odds stacked against it.

Tom Henry is The (Toledo) Blade’s environmental-energy writer and has been BookShelf editor since 2011.