"Water in Plain Sight: Hope for a Thirsty World"

"Water in Plain Sight: Hope for a Thirsty World"

In her latest book, “Water in Plain Sight: Hope for a Thirsty World,” Judith D. Schwartz takes us on a whirlwind tour to demonstrate how allying with the natural water cycle can revive landscapes, make them more productive and reverse water shortages — all within the framework of a changing climate.

Schwartz's message is clearly defined by the cover of her book. Wrapped around the jacket is a map of the globe. But instead of the usual image of continents surrounded by water, what we see instead are continents defined by the water they could be producing — if only we knew how. She makes the case we already do.

An SEJ member and award-winning author of “Cows Save the Planet: And Other Improbable Ways of Restoring Soil to Heal the Earth,” Schwartz introduces us to the water innovators — scientists and researchers, ranchers and farmers — who are finding new routes to water security, food stability and economic resilience.

We begin in Zimbabwe, where Schwartz introduces us to Allan Savory, director of the Africa Centre for Holistic Management. He's teaching Africans how to use grazing animals to reinvigorate and maintain healthy grasslands, where waterholes don't dry out and rivers flow much longer into the dry season. Once, those animals were native herds of eland, antelope and zebra. These days, cattle serve the same purpose.

In Savory's view, what's important is not how much rains falls on a given location, but how effectively that rainfall is absorbed and captured to feed aquifers, groundwater and plants. 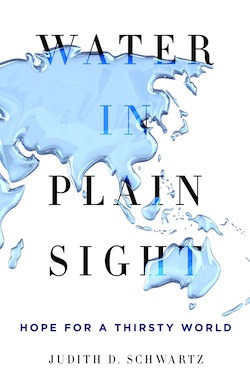 And how it can ultimately benefit cattle — and people. She says it's a means of reversing desertification, caused by human intervention on the landscape, not by natural or anthropogenic climate change.

In Zimbabwe, Savory is using cattle to keep the soil in place and keep nutrients in the ground, instead of carbonizing into the atmosphere and adding to climate change.

Here's how it works:

Cattle dung adds nutrients to the soil. Cattle hooves dig that dung in, enriching the soil and providing small pockets in the soil that help it to absorb the rain, instead of running off the surface. Grasses begin to thrive from the added nutrients and moisture, creating soil covers that prevent bare ground and stream bank erosion when the rains arrive.

Elephants no longer need to create destructive water holes, because streams that are recharged by groundwater feeds of rainfall flow longer into the drought season. That keeps stream banks in place, further enhancing groundwater recharge. Grasslands thrive, waterways thrive, cattle thrive. And in a landscape where cattle are wealth and water is crucial to growing basic food crops, people thrive.

This success story is, according to Schwartz, being played out in small, experimental water projects all over the world.

In the Brazilian Amazon, where forest cover is being destroyed at a rapid rate, Schwartz says plants play a far larger role in sequestering and dispersing moisture in the larger climate water cycles than previously thought. Literally, forests bring the rain.

She tells the story of Antonio Donato Nobre, senior scientist at Brazil's National Institute for Amazonian Research in Manaus, whose research shows that Sao Paulo's current water crisis, brought on by drought, is the direct consequence of man-made deforestation.

Cleared land robs soil of the capacity to sequester water and the ability of a tree canopy to cool the soil so that it's less prone to evaporation in a hot climate. Trees recycle oxygen and water vapor, and also slow the water cycle, so that soils can hang onto moisture longer.

Given the four billion or so trees in the remaining Amazon rain forest, the water vapor they produce becomes part of the global water cycle, providing distant localities with water they might not otherwise have received.

Schwartz says plants aren't just recipients of water: They also play a crucial role in determining where water goes and what it does. So vast forests such as the Amazon help drive weather in other parts of the plant, not just locally.

One fascinating fact Schwartz turns up is that forests emit natural aerosols that enhance cloud condensation. So forests really create their own rain cycles and perpetuate the water they need to grow.

In many ways, Schwartz says, trees really are the answer to drought and water enrichment, in addition to sequestering carbon and keeping it out of the atmosphere.

But there's water to be found even in arid climates such as the high steppes of western Texas. There, Schwartz introduces us to Katherine and Markus Ottmers, who are not only harvesting rainwater, but are actually collecting dew.

At their off-grid headquarters, called Casa Manana, they're using a “rain barn” to gather as much as 60 gallons of atmospheric dew per day, enough to water their fifty goats and provide drinking — and even showering — water to the eight people who live there.

Schwartz doesn't offer a grand plan for restoring our planet's water cycles. She doesn't attempt to calculate how much land restoration or re-forestation it would take to bring water back to drought-thirsty regions. Nor does she much discuss the challenges of taking these water-restoration techniques to scale — or what it would take politically or economically to accomplish that.

What Schwartz does offer is a vision of water for a thirsty world through a better understanding of what makes natural systems thrive.

Karen Schaefer is an SEJ member and a freelance radio reporter based in northern Ohio.