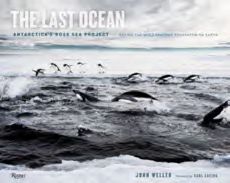 Few Americans have probably heard of the Ross Sea, which is a deep bay of the Southern Ocean next to Antarctica. But many know about Chilean sea bass, a mild white fish that has been popular in high-end restaurants for more than 15 years.

That’s the problem for SEJ member John Weller and conservationists working to protect the Ross Sea. “The Last Ocean” is a visually stunning tour of the Ross Sea, written by Weller and illustrated with his photographs.

This stretch of ocean covers 1.9 million square miles, much of it above a long, shallow continental shelf. It accounts for only 3.2 percent of the Southern Ocean, but is home to a huge share of the Antarctic’s animals, birds and sea creatures.

“The Ross Sea is one of the most, if not the most, untouched parts of the world ocean. It is the best we have left, the cream of the crop,” marine conservationist Carl Safina writes in the book’s forward.

Antarctic toothfish, which can grow to more than 6 feet long and weigh up to 300 pounds, are the largest predators in the Ross Sea. Those fish and their slightly smaller cousins, Patagonian toothfish, are sold worldwide as Chilean sea bass (marketers invented the alias to make the fish sound more appealing).

Very little is known about their life cycles or how abundant they are, but longliners are already catching 3,000 tons of Antarctic toothfish in the Ross Sea every year. Weller and his colleagues fear that this growing fishery will disrupt the ecology of the Ross Sea.

Weller traveled to the Ross Sea four times and learned scuba diving and underwater photography to document how diverse and unspoiled this region still is, at least for now.

“The Last Ocean” is packed with arresting images taken on land, at sea, and underwater. The book’s large format and the broad perspective of many of the photos convey this region’s vastness. They also show very effectively how beautiful it is.

The images are interspersed with narrative describing Weller’s travels and explaining the complex science of Antarctic life. Here is an explanation of the structure of sea ice, which looks barren from above but is the base of the food chain in polar regions:

“The solid layer of sea ice is sandwiched between a thick layer of loosely packed ice platelets below and a layer of snow above. The assemblage of platelets provides a haphazard complex of tiny caves and passages, protected from rough water by the weight of the ice, and from harmful ultraviolet rays by the snow above. Fertilized and sheltered, phytoplankton blooms in the platelets . . . Displaced by the ship’s passage, overturned rafts of sea ice release a dark brown soup of tiny plants into the icy water.”

And a description of the physical adaptations that enable Emperor penguins to dive 500 meters deep for up to 20 minutes: “Just before a dive, a bird races its heart rate to 250 beats per minute, saturating its body with oxygen. As soon as it hits the water, the Emperor drops its heart rate back to 60 beats per minute, and continues to slow its heart over the course of the dive . . . . as it explodes from the water, it again accelerates its heart, flooding oxygen back into its system. Physiologically, the bird endures the equivalent of a human heart attack on each dive with no ill effects.”

Weller also shows how difficult it is to operate in Antarctic conditions. Divers will appreciate his descriptions of cold-water logistics and operating under sea ice.

In one episode Weller is stunned underwater when a Weddell seal delivers a sonic blast straight into his ear (the seals may use sound to communicate, and perhaps to stun prey.)

Weller and conservationists want the Ross Sea to be declared a no-take Marine Protected Area to shield it from overfishing. Most readers will never go to Antarctica, but this book makes a powerful case that everyone should care about what happens there.

Jennifer Weeks is a Boston-based freelancer and a former SEJ board member.