"The War on Science: Muzzled Scientists and Willful Blindness in Stephen Harper's Canada" 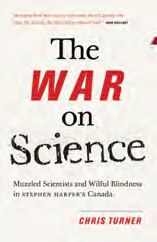 "The War on Science: Muzzled Scientists and Willful Blindness in Stephen Harper's Canada"

Surely, it’s not a new theme: Journalists, by nature, kick the tires around almost every state and federal administration, every political party, every PAC, industry lobby, labor union and (hopefully) environmental group to see who’s delivering on the promises they make and who’s being disingenuous – as they should.

What separates veteran journalist Chris Turner’s “The War on Science: Muzzled Scientists and Willful Blindness” is his gut-hitting prose.

Turner’s book is a harsh indictment of ultra conservative Prime Minister Stephen Harper’s administration and the anti-science movement in general. It cites the impact of savage budget cuts on morale and in practical terms. It shows how forced silence has driven away some of the Canadian government’s best scientists.

Turner distills and weaves his meticulous research into a hard-hitting narrative that reads almost like a detective story or a eulogy to science for his beloved country.

The book’s only 170 pages – 134 of those pages are the actual narrative, followed by a chronology of Canadian history and 16 pages of source notes in small type. But it’s chock full of insight into how administrations can both influence science and stifle it.

My interest in this book came following a tip from former SEJ member Craig Saunders of Toronto, a co-fellow on the week-long Institutes for Journalism and Natural Resources expedition around Lake Erie in 2008 who’s become a good friend and, like me, someone who likes broadening his horizons and helping others do the same.

My newspaper, The (Toledo) Blade, is somewhat unique in how it tries to offer the Canadian perspective in its Great Lakes coverage from time to time, certainly not in any great detail but in a way that gives its Toledo-area readers at least a flavor of how cross-boundary issues are perceived on the other side of the border.

To give you an idea how Americans can become oblivious to Canada, consider that a mutual water agreement among Great Lakes governors in 1985 – one that became a framework for policy and planning issues for the next quarter century – had no input from the two Canadian provinces which also border the lakes.

What I expected was a Canadian version of books that have appeared in recent years critical of the former Bush administrations, the current Obama administration, and so forth. What I got was a compelling read that blew away the long-overplayed and much exaggerated perception of Canadian politicians being so much more attuned to environmental issues than those in the United States.

Turner offers an aggressive, repugnant assessment, one that left me wondering why U.S. residents spend so much time complaining about George W. Bush’s spotty views on science, President Barack Obama’s failure to provide the access to records and experts he promised – and not more time learning about the near-180 degree reversal in the Canadian government’s faith in science.

Canada’s dramatic political shift not only has ramifications for boundary waters, such as the Great Lakes, but also could serve as a chilling blueprint for what could happen in the United States under the right set of circumstances – not a far-fetched idea, given how longtime Republicans themselves bemoan the direction of the party and how it has strayed from Ronald Reagan principles.

After taking readers through a stunning odyssey of Canada’s growing contempt for science in the high-level political arena – from the closure of Arctic research stations to slashed budgets and power for agriculture and fisheries, while at the same time promoting more drilling in the Arctic and other sensitive areas – Turner holds nothing back in his summary of the situation.

“Stephen Harper’s Canada is a country that has become a global system of callous, profit-driven hostility to sound environmental stewardship, a pariah state that lays ruin to international climate talks and abandons its sworn commitment to greenhouse gas reductions and opposes any measure that appears to take the planet’s ecological health seriously,” Turner wrote.

He adds: “Stephen Harper’s Canada is a country, alone among the democratic nations, that bars its scientists from discussing their work in public and sends spin doctors to ensure that message discipline trumps scientific fact even at academic conferences. It is a country where environmental advocacy is foreign and dissenting opinion treated as treasonous, a country where scientists march in the streets to reassert the primacy of the scientific method and doctors need to disrupt press conferences if expert analysis is to be heard in discussions of health-care policy.”

The book could have been better if there had been more cooperation from the Harper administration for a meaningful dialogue.

One gets the impression that what’s happening in Canada goes well beyond the soft-pedaling and sugar-coated public relations efforts that have emerged in the United States.

It makes a case for how power has been corrupted and legitimate science – or, at least, whatever aspects of it emerge as inconvenient truths or barriers to industry – is mocked and muzzled. There are, indeed, lessons to learn for the United States, especially when one examines how quickly things have apparently unraveled in Canada.

Others with SEJ ties are in support of this book. Famed activist-journalist David Suzuki, a keynote at SEJ’s 2000 conference in East Lansing, MI, is quoted on the book cover as saying it should be required reading, as is Andrew Nikiforuk, whose book, “Tar Sands: Dirty Oil and the Future of a Continent,” won SEJ’s 2008-2009 Rachel Carson Environment Book Award.

Turner, who lives in Calgary, is author of two other books, “The Leap: How to Survive and Thrive in the Sustainable Economy” and “The Geography of Hope: A Tour of the World We Need.”

Tom Henry is SEJournal’s book editor and a former SEJ board member. He has been associated with SEJ since 1994.