Between the Lines: Making ‘Rain’ for the Caring Middle

For this latest installment of “Between the Lines,” a question-and-answer feature with authors, SEJournal book editor Tom Henry interviewed longtime SEJ member Cynthia Barnett about her third book, “RAIN: A Natural and Cultural History,” which came out in April. It’s a unique, ambitious book that goes beyond climate science and water in general to show how rain itself has been perceived around the world by numerous cultures throughout history. Barnett sees rain as “a unifying force in a fractured world.” She also is the author of two other highly acclaimed books,“Mirage: Florida and the Vanishing Water of the Eastern U.S.” and “Blue Revolution: Unmaking America’s Water Crisis.”

SEJournal: This is such a unique book. How did you get the idea for it and what convinced you there was enough material to do a whole book just about rain?

Cynthia Barnett: The seed of the idea came from readers of my previous books, “Blue Revolution” and “Mirage.” As I went around the country speaking about water, I found that even people skeptical of climate change love to talk about the crazy weather: record rainfall, epic drought, extreme storms. I started using weather as an opening to talk about climate change with general audiences – in libraries and churches and the like. Then one drizzly Friday afternoon, I was swooning over this nice rainfall on the patio outside my office, and it hit me that I could write the story of rain. I felt sure someone must have already done it, but no one had.

The problem was never whether there would be enough material – just the opposite. The story of rain is the story of Earth and humanity; it’s impossible to do it justice. It pains me to think of everything I left out, including sections I worked so hard on and had to cut, such as the chimpanzee rain dances observed by Jane Goodall and others at Gombe National Park in Tanzania.

SEJournal: Your first two books are fine water books. But how would you compare “Rain” in terms of the writing? Were you thinking it had to be something more than yet another water book? What special challenges or surprises did you encounter?

Barnett: I spent many years as a journalistic water geek – I’ve written not one but two entire book chapters on water economics, and countless wonky policy stories on water infrastructure, wetlands mitigation banking, desalination, you name it. I’m proud of all that work, but for once, I wanted to try to write something literary and even lyrical. “Rain” is that effort.

What surprised me was how much harder it was than writing about policy and economics, maybe because I wasn’t used to it. For me, describing nature in the Hoh Rainforest in Washington or the rainiest place on Earth in Cherrapunji, India, without sounding purple, was harder than explaining water pricing. I’ve never rewritten so much or anguished so much over every sentence.

SEJournal: Many of us have written about water, weather and climate, but your narrative connects rain to culture and religion and everything from modern weather apps, the ’80s hit “It’s Raining Men,” witchcraft trials in the Little Ice Age, Thomas Jefferson and Texas Gov. Rick Perry. What inspired this approach and what challenges did you face tying things together to keep them from sounding like just a string of anecdotes?

Barnett: There is a lot of religion and culture – music, literature, even fashion – in “Rain” because those frameworks can help make environmental stories more engaging, and because I wanted to draw new readers to my work. Too often I feel like we write for the choir, the people already concerned about water and other environmental issues. I wanted to do a better job reaching the “caring middle” – people who would care if they knew the same things we do, but they don’t seek out our stories.

The organizing thread is similar to my other books: Our hubris and constant attempt to defy nature, erecting subdivisions in places that are too wet to build, growing corn in places too dry to farm. With rain, we’ve always yearned for some semblance of control, from the Roman rain god Jupiter Pluvius, to Congress’s foray into rainmaking in the 19th Century. Governor Rick Perry’s rain prayers aren’t much different than the Mesopotamians’ 4,000 years before. In the end, of course, it turns out that we have managed to redirect the rain – only not in the way anyone would have intended.

SEJournal: I understand SEJ had a direct influence on you landing a book contract. What was it? 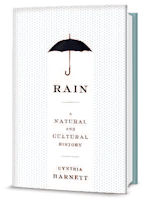 Barnett: I was unlucky enough to send “Rain” to the publishing houses in late October 2012 with the subtitle “A 4-billion-year-old love story” – just before Hurricane Sandy barreled into New York. For me, rain is a love story, but it was naive to pitch it that way. Some of the editors responded while shuttered in at home, so eager were they to make comments like, “I don’t LOVE this idea.” I’ve never gotten such snarky rejection letters.

Here’s where SEJ comes in. I had just been at the annual [2012] conference in Lubbock, where I talked on Bill Souder’s book panel about “Rain” and my idea about weather as a unifying force and a way in with the “caring middle.” Bill was intrigued enough to tell his editor at Crown, and she was intrigued enough to call my agent and ask for the proposal – which never happens. She read the proposal, completely got the book, and ultimately bought it. Had I not gone to SEJ that year, I still would have published “Rain,” but I wouldn’t have a major publisher and all that means to a book.

SEJournal: Roughly how many other books did you read and how many scientific journals, periodicals and historical documents did you consult to give yourself the ability to write with authority on this subject? Any that would be particularly valuable to SEJ members? What agencies do you find most helpful?

Barnett: This is the beauty of turning your beat into a book. So much of what I read and collected over the years to educate myself about water helped me see how to write the history of rain. I learned about the “rain follows the plow” era of American settlement more than a decade ago when I first read Wallace Stegner’s biography of John Wesley Powell, “Beyond the Hundredth Meridian.” Anyone covering water/drought now will benefit from that wonderful book, along with Marc Reisner’s “Cadillac Desert” and Donald Worster’s “Rivers of Empire” and “Dust Bowl.”

I couldn’t give you a number on the journal articles. I have privileges at a university research library, which has been essential to each book. For every topic, I check out every book and I scan everything that’s appeared in every major journal in the past decade or so to see what jumps out. For history, art and culture I relied alot on JSTOR [a digital library of academic journals, books and primary sources].

As far as agencies go, I think weather/climate reporters are fortunate that they get to deal with NOAA. I don’t think I’ve met one person in NOAA who wasn’t helpful and committed to helping the public understand our complicated atmosphere. The meteorologists I visited at The Met in Exeter, England, were of the same spirit. For rainfall data, I stuck with NOAA’s National Climatic Data Center in Asheville, N.C., so that my numbers would be consistent. NCDC also has the world’s largest archive of historic weather records. They are stacked to the ceiling in this cavernous basement, some in ship’s captains journals hundreds of years old.

SEJournal: What advice would you give to would-be writers interested in tackling a subject as broad as rain, so they can stay focused on storytelling and not end up with something that reads like a textbook or scientific journal?

Barnett: One mistake we journalists make is to think of a book as multiple articles joined end to end. I did too much of that in my first two books. It’s important to build a strong argument or narrative through-line, with great transitions from chapter to chapter, so that the reader feels with you from beginning to end and the overarching narrative hangs together.

This seems like crazy advice from someone who stuck the history of the mackintosh raincoat in a book that ultimately leads to climate change. But it’s all connected. No one knew the factories cranking out macs and other textiles in Manchester, England, in the nineteenth century would help create first the human health disaster of smog, and then acid rain, and then – even change the climate. When it comes to the environment, everything is connected to everything else. In a way, that made my job easier.