"There Is Still Time: To Look at the Big Picture...and Act" 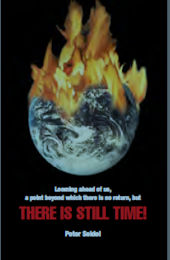 "There Is Still Time: To Look at the Big Picture...and Act"

Environmental writer and longtime SEJ member Peter Seidel asks why humans aren’t acting fast enough to save the planet in his latest book, “There Is Still Time: To Look at the Big Picture...And Act.”

Seidel first explored the topic in his 1998 book, “Invisible Walls: Why We Ignore the Damage We Inflict on the Planet...and Ourselves.” In his newest book, Seidel, a former architect and urban planner, takes his argument further, insisting that we are failing to look at the big picture and not facing up to the real cause of most of our problems: ourselves.

To take a line from the comic strip character Pogo, “We have met the enemy and he is us.” But unlike Walt Kelly’s Pogo, depicted picking up litter in his native swamp on a poster in honor of the first Earth Day, Seidel says the difficulties with solving our planet’s environmental problems have gone far beyond the way we continue to trash the ecosystem.

He believes that as a former hunter-gatherer species which used to live in equilibrium with the natural resources we depend on, we have since failed as a species to deal with the results of the much more complex society we have now created.

In Part One of this slender 212-page volume, Seidel sketches out how we have (mis)behaved over time as individuals and societies. He looks at ways our governments and businesses operate in conflict with our basic needs, and suggests things we can do to change direction.

Reading like an extended essay, Seidel in his opening chapter writes that it’s clear modern humans see the world in pieces, not connected to the whole. He argues most of us are seriously disconnected from those essential resources we need for survival: shelter, food and warmth.

Sauntering through a megastore, we can’t grasp where food comes from or how it grows, and we don’t see what our chemical farming practices are doing to soil and water and to farm laborers.

We’re also disconnected from the sources of our modern lifestyles. We don’t connect mountaintop removal mining with the energy we need to keep our computers running. We don’t see the environmental impacts of a December bunch of Chilean grapes or the cruel life of diamond miners when we buy an engagement ring. We don’t fundamentally understand that rampant economic growth is not sustainable on a finite planet.

Seidel believes we are also disconnected from seeing larger patterns. Because modern life is so complex, we tend to withdraw into our own comfort zones, preferring to deal with Facebook friends with similar views, rather than challenge ourselves with the environmental impacts of our daily living.

Seidel believes humans can’t think much beyond the next generation. So we don’t examine the impacts of our actions today on the distant offspring of the future.

In the second part, Seidel asked Gary Gardner, senior fellow at the Worldwatch Institute, to summarize what is happening in terms of population, water quality, biodiversity and climate change, to name a few. While succinct, this part of the book is a solid overview of the environmental challenges Seidel says we have created and now need to face, with suggestions for further reading.

It’s a daunting list. But Seidel also offers some solutions.

First, he says we need to better understand ourselves and our natural human limitations, then move beyond them with better insight, planning and mutual cooperation.

Most immediately, he writes, we need to rethink our economic policies to align with our need to maintain the planetary resources we need to survive.

If there is any criticism of this thought-provoking book, it would be that Seidel doesn’t sufficiently address in any depth the political means by which we can foster greater cooperation to achieve these planetary environmental goals. How do we get our own entrenched U.S. political parties to agree on anything that would solve these issues, much less bring less-developed countries into the fold?

Still, Seidel believes we have not yet crossed the environmental threshold beyond which human misery — and possibly ultimate human species destruction — is inevitable. Seidel still has hope and is fighting for change while we still have time.

Karen Schaefer is an Ohio-based radio journalist and an SEJ member.