"A River Runs Again: India’s Natural World in Crisis, from the Barren Cliffs of Rajasthan to the Farmlands of Karnataka"" 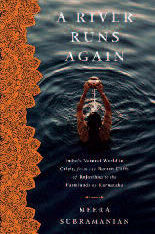 "A River Runs Again: India’s Natural World in Crisis, from the Barren Cliffs of Rajasthan to the Farmlands of Karnataka"

Three-fourths through her captivating exploration of environmental troubles in India, SEJ member Meera Subramanian is in Mumbai reporting on the catastrophic disappearance of vultures from the skies of South Asia when the director of the Bombay Natural History Society shifts the conversation from the species near extinction to the one that seems to be able to survive anything, anywhere.

“We’re like pests … cockroaches, rats, and bandicoots,” Asad Rahmani, bird biologist, tells Subramanian. “You have seen the slums. Look at the horrible conditions we can live under and still have reproductive success. No other species has such huge tolerance.”

Rahmani adds: “For the Earth, that is the unfortunate part. If we had a very narrow tolerance level of pollution and food …maybe we would take more care of the Earth.”

Subramanian can forgive Rahmani his loss of hope, as he remembers the enormous flocks of vultures of his youth, now nearly wiped out by a veterinary drug in cattle carcasses. The decimation has had cascading results, from swelling feral dog populations to more human disease.

There is even a spiritual toll, upending the Parsi tradition of laying their dead atop towers so that scavenging birds can naturally dispose of the physical remains.

Subramanian’s story of the piling up of bodies at the Parsi's Towers of Silence in Mumbai — the silence now in the vulture-less skies — is somehow both gorgeous and grim.

Such is the brilliant balance of Subramanian’s first book.

Reporting on what at first seems to be intractable human and natural catastrophes in India, Subramanian never loses her own hope, which is pragmatic enough to keep her readers believing, too.

“A River Runs Again” is a clear-eyed exposé of environmental crises in a nation where six out of ten citizens lack clean water, a third live without electricity and less than half have access to a toilet.

But it is also a reverent homage to her father’s country and a radiant work of solutions-oriented journalism.

The book is well-organized into five major environmental challenges under the five elements of Hinduism: earth, water, fire, air and ether (“akasha” in the Hindu belief system).

With sandals-on-the-ground reporting from small farms to smoky village kitchens, Subramanian gives voice to ordinary Indians as she unearths micro-enterprises that are making a difference and exposes well-meaning efforts that are not.

Reporting on air pollution from home cook stoves — responsible for an estimated four million deaths a year — she cuts through the pricey idealism of multinational NGOs that have spent decades and millions of dollars working to bring “new and improved” cook stoves to Indian women who don’t want them.

“What if all those efforts went instead to finding ways to expand access to the proven technologies already cooking up food in the developed kitchens of the world?” Subramanian asks. Electricity for the six hundred million Indians who live without it could, for instance, also solve the cook-smoke problem.

From the challenges of chemical agriculture to groundwater depletion, Subramanian’s solutions are generally indigenous, local and small-scale; in energy, the likes of solar, wind, bio-gas and micro-hydro.

Subramanian devotes her section on ether to population growth and the plight of women and girls in Bihar, the state with some of India’s youngest brides and highest fertility rates.

Bihar well illustrates why the education of girls and empowerment of women are such important stories on the environmental beat.

“Multiple studies have shown that the single most influencing determinant for the number of children a woman will have in her lifetime — superseding race, religion, nationality and class — is her education level,” Subramanian writes. “Education as birth control. Education is birth control.”

The book’s title comes from Subramanian’s inspirational section on water, a narrative built around villagers in Rajasthan who replenished their dry wells and brought the Arvari River back to life over many years with water-works projects modeled on ancient water-management techniques: small dams, water-saving trees, catchments that allow monsoon rains to seep back to the aquifer rather than wash away.

When the Arvari River flows again, a sight no young people in the village have ever seen, readers cheer — as we do for all of India by the end of this revolutionary book.

Gainesville-based Cynthia Barnett is a visiting University of Florida faculty member, an SEJ member and author of three books about water, including her latest, “Rain: A Natural and Cultural History,” reviewed in the Spring 2015 SEJournal.